10th Class Computers IT Basics Introduction to the Internet

Introduction to the Internet

Introduction to the Internet

The research about the Internet began in 1960s. In mid 1990s the Internet became commercialized. The Internet is a global network of computers. It uses TCP/IP standard suite to serve billions of users worldwide. It is also called network of networks that contains number of public, private, academic, banking and government networks. Internet has brought the new revolution in communication media. It enhances old technology, such as telephone and television in VolP (Voice over Internet Protocol) and 1PTV. Print media has been reshaped into e-newspaper, blogging and web feed. 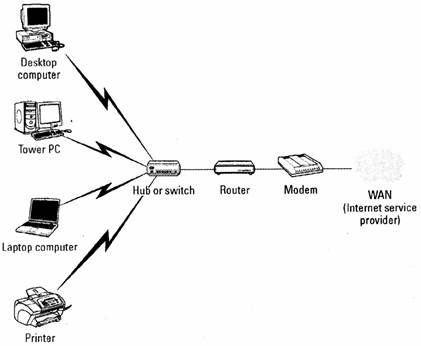 The Internet is controlled by two groups that influence it. Two volunteer groups?a council called the 1AB (Internet Architecture Board) and a technical advisory team called the IETF (Internet Engineering Task Force)?work together to enforce minor rules to keep the whole thing working, such as deciding which kinds of communications languages should be supported by the network. Although the Internet includes different types of computers and networks, it can't work unless everybody observes a few basic rules in their underlying communications technologies. These volunteer groups develop these rules to keep the Internet running smoothly. The following figure shows how computers are connected with Internet:

The Following are the Advantages of the Internet

Using Internet you can send any information, greeting and any type of file, such as picture to any location of the world.

Using Internet you can buy and sell products all over the world. There are many websites available in market, such as www.baazi.com that provides the facility to buy or sell product.

Using Internet you can book your railway ticket, air ticket and cinema ticket. You do not need to go anywhere just connect your computer with the Internet.