Perimeter and Area of a Circle

The great Indian mathematician Aryabhatta (A. D. 476 – 550) gave an approximate value of \[\pi \] He stated that \[\pi =\frac{62832}{20000}\], which is nearly equal to 3.1416. It is also interesting to note that using an identity of the great mathematical genius Srinivas Ramanujan (1887 – 1920) of India, mathematicians have been able to calculate the value of n correct to million places of decimals. As you known from Chapter I of Class IX, n is an irrational number and its decimal expansion is non – terminating and non – recurring (non – repeating). However, for practical purposes, we generally take the value of \[\pi \] as \[\frac{22}{7}\] or 3.14, approximately.

Areas of Sector and Segment of a Circle 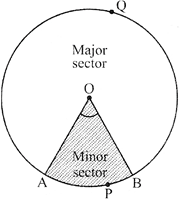 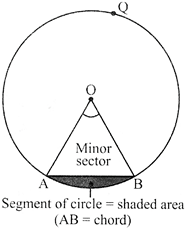 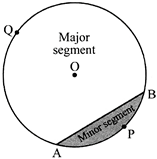 Calculating area of sector of a circle 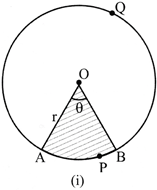 Let OAPB be a sector of a circle with centre O and radius r (see figure). Let the degree measure of \[\angle AOB\] be \[\theta \].

In a way, we can consider this circular region to be a sector forming an angle of \[360{}^\circ \] (i.e., of degree measure 360) at the centre O. Now by applying the Unitary Method, we can arrive at the area of the sector OAPB as follows:

Thus, we obtain the following relation (or formula) for area of a sector of a circle:

Calculating length of arc of a circle

Let ‘r’ be the radius of the circle and \[\theta \] the angle of the sector in degrees. 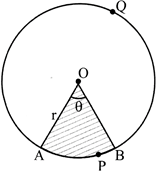 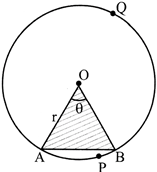 Calculating area of segment of a circle

Now let us take the case of the area of the segment APB of a circle with centre O and radius r (see above figure). You can see that:

Note: From figure (ii) to (iii) respectively, you can observe that:

Areas of Combinations of Plane Figure

So far, we have calculated the areas of different figures separately. Let us now try to calculate the areas of some combinations of plane figures. We come across these types of figures in our daily life and also in the form of various interesting designs. Flower beds, drain covers, window design, design on table covers, are some of such examples. We illustrate the process of calculating areas of these figures through some examples.

A quick look at relevant formula:

(Where r is radius and d is diameter)

Rotations Made by a Wheel 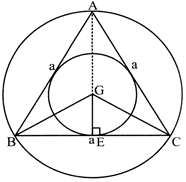