In this chapter, we will solve problems related to reasoning and aptitudes as we know that Reasoning and logic skills are an integral part of Mathematics.

In such types of problems, we have to choose a missing number (or character) in the figure out of the given options.

Find the missing number in the following figure.

In such types of problems, we draw a diagram by using the given information. The following diagram shows all the directions in a proper manner. 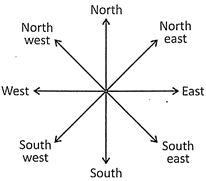 If P is to the north of Q and R is to the west of Q, then in which direction is P with respect to R?

Explanation: Clearly from the diagram it is clear that P is in north-east direction with respect to R.

In such types of problems, we should first be clear on the relations given in the following table:

Children of maternal uncle/aunt \[\to \]Cousins

Children of uncle \[\to \]Cousins

Pointing at a photo, A man said, "His father is the only son of my mother". The man has a relation from the person in the photo is of _____

Clearly the photo belongs to man's son/so the man is the father of the person shown in the photo.

In such types of problems, a series of figures is given which proceeds with a certain rule or pattern.

Find the figure which comes next in the series.

Explanation: Each next figure rotates \[45{}^\circ \] anticlockwise in each block and one line is added to its top and bottom alternatively.

Hence the answer figure is (b).