10th Class Science Carbon and its Compounds Soaps and Detergents

A soap is a sodium salt of long chain fatty acid. A soap molecule consists of along hydrocarbon chain. It composed of carbons and hydrogens, with a carboxylic acid group on one end which is ionic bonded to a metal ion, usually a sodium or potassium. The hydrocarbon end is nonpolar and is soluble in nonpolar substances, such as fats and oils; and the ionic end, the salt of a carboxylic acid is soluble in water. The structure of a soap molecule is represented below: 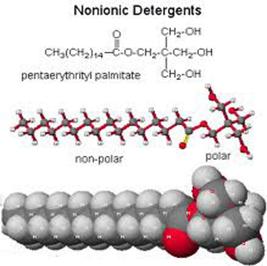 Detergents are structurally similar to soaps, but differ in the water-soluble portion. Three examples of detergents are shown below. When a soap or detergent is added to water, a polar solvent, the molecules form clusters, known as micelles, in which the polar ends of the molecules are on the outside of the cluster and the non-polar ends are in the middle. The leaning action of both soaps and detergents results from their ability to emulsify or disperse water-insoluble materials (dirt, oil, grease, etc.) and hold them in suspension in water. This ability comes from the molecular structure of soaps and detergents.

When a soap or detergent is added to water that contains oil or other water-insoluble materials, the soap or detergent molecules surround the oil droplets. The oil or grease is "dissolved" in the alkyl groups of the soap molecules while the ionic end allows the micelle to dissolve in water. As a result, the oil droplets are dispersed throughout the water. This is referred to as emulsification and can be rinsed away. Soaps, will react with metal ions in the water and can form insoluble precipitates. The precipitates can be seen in the soapy water and are referred to as "soap scum". This soap scum can form deposits on clothes causing them to be gray or yellow in color. To eliminate the metal ions in water, washing aids such as washing soda (sodium carbonate) and borax (sodium tetraborate) were added to the wash water. These compounds would precipitate with the metal ions, eliminating most of the soap scum. With the discovery of synthetic detergents, much of the need for washing aids was reduced. A detergent works similar to a soap, but does not form precipitates with metal ions, reducing the discoloration of clothes due to the precipitated soap. Modern laundry detergents are mixtures of detergent, water softeners, optical brighteners, stain removers, and enzymes.

Which one of the following is a functional group of alcohol?

Which one of the following is a denatured alcohol?

Which one of the following is insoluble in water?