A reflex action, also known as a reflex, is an involuntary and nearly instantaneous movement in response to a stimulus. A true reflex is a behavior, which is mediated via the reflex arc. In animals, reaction time to visual stimuli is typically 150 to 300 milliseconds

A reflex arc is a neural pathway that controls an action reflex. In higher animals, most sensory neurons do not pass directly into the brain, but synapse in the spinal cord. This characteristic allows reflex actions to occur relatively quickly by activating spinal motor neurons, without the delay of routing signals through the brain. Although the brain receives sensory input while the reflex action occurs. 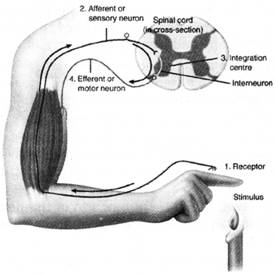 There are two types of reflex arc - autonomic reflex arc affecting inner organs and somatic reflex arc affecting muscles. When a reflex arc consists of only two neurons in an animal i.e. one sensory neuron, and one motor neuron. It is defined as monosynaptic. Monosynaptic refers to the presence of a single chemical synapse. In the case of peripheral muscle reflexes, brief stimulation to the muscle spindle results in contraction of the agonist or effector muscle. By contrast, in polysynaptic reflex pathways, one or more interneurons connect afferent (sensory) and efferent (motor) signals.