But work done is equal to the

Where V is potential difference and I is the current flowing through the conductor.

Putting in the above equation we get,

Where R is the resistance of the conductor.

One kilowatt hour is the amount of electrical energy consumed when an electrical appliance of one watt power is used for one hour.

Assuming that all the electrical energy consumed during this work done is converted into heat we have,

Thus, according to joules law of heating:

There are many application of heating effect of the current.

Some of the Heating Effect of the Current are

Identify the series connection in the given figures

Calculate the equivalent resistance of the circuit given below:

Which one of the following is a safety device in the household electric circuit? 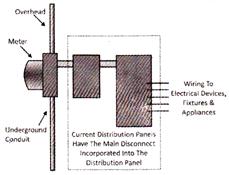 Calculate the electrical energy consumed by a electric bulb of 100 watt in 40 hours.

Which one of the following appliances produces the maximum heat when electric current flows through it?