We see the variety of things around us in which some are living and some are non living. All the living organisms have organized cellular structure with different levels of organization. An organized and ordered structure with cells, tissues, organs, organ system, is an important feature of living organism that distinguishes it from non living organisms. If this organization break down then the organism is no longer living. The maintenance functions of living organisms must go on forever to sustain life. The process which together performs this maintenance job are called life process. The life process needs energy, which mostly comes from the plants and trees. The outside source of energy is varied, as the environment is not in our control. So these sources of energy is needed to be broken down or built up inside our body. The process of taking in oxygen and using it for the purpose of breaking down food molecule inside our body for releasing energy is called respiration. Whether it is a multicellular or unicellular organisms, the energy is required by all.

Nutrition is a process of providing nutrient to the body i.e. to cell and organisms necessary for supporting life process. In other words, we can say that nutrient are the substance which provide energy to the living organisms to remain alive. There are different modes of nutrition, such as autotrophic and heterotrophic. The autotrophic organisms includes the green plants and some of the bacteria, while all the other organisms comes under the category of heterotrophic mode of nutrition.

The organisms, which can manufacture their own food using the natural raw material are called autotrophs. All the green plants can manufacture their own food using natural raw material and hence are autotrophs. The photosynthesis in plants that takes place in presence of sunlight is an autotrophic mode of nutrition. The material is taken in the form of carbondioxide and water, which is then converted into carbohydrates in the presence of sunlight and chlorophyll. Carbohydrate is used by the plants for providing energy to the plants. 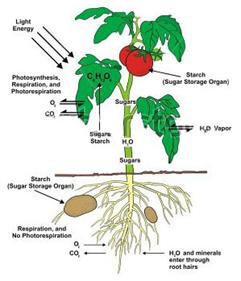 Apart from these other raw material are also required by the plants for the process of growth and development. Other material like nitrogen, phosphorus, iron and magnesium are taken up from the soil by the plants. Nitrogen is essential for the process of protein synthesis in the plants. It is used in the form of nitrates or nitrites. Plants take up the nitrogen from the atmosphere and convert it in the form of compound called nitrate or nitrites.

The factors which affects the rate of photosynthesis are light intensity, carbondioxide, temperature, and water in the atmosphere. Internal factors includes chlorophyll content.

Sunlight is essential for the process of photosynthesis. Take a leaf from the plant in the sunlight and put it in a beaker and boil it for two minutes and then transfer it into the beaker containing alcohol and again warm it for few minutes. We observe that the leaf turns white which indicates that the chlorophyll has been removed. Now wash and dried the leaf and place it inside the beaker containing dilute iodine solution. We observe that the leaf turns bluish black which shows that leaf contains starch. On the other hand if we takes the leaf of the plant which was not in sunlight for more than 24 hours and perform the same experiment we observe that the leaf colour does not change on putting it into iodine solution which shows that starch has not formed in this case.

The mode of nutrition in which organism derived its food from the other organism is called heterotrophic nutrition. All the non green plants and animals are heterotrophic in nature. Depending on the mode of intake the heterotrophic organisms may be of different types such as parasitic, saprophytic or holozoic.

Those organisms which live inside the body of other organisms called host and obtain its food from its host are called parasites. For example, hookworms, tapeworms, leeches, lice, etc.

The organism, which derives its food from the dead and decaying organisms are called saprophytes. These organisms possesses enzymes, which helps them to break down complex food into simple forms. For example, the bacteria, yeast mushrooms etc.

In this mode of nutrition, the organisms engulf the complex food molecules and digest it inside the body, absorbs the energy giving material and excretes the waste material from the body. For example, amoeba, paramecium etc. 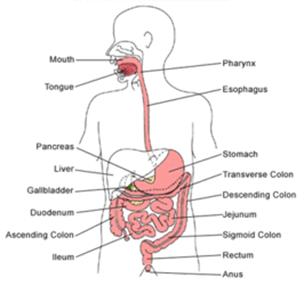 The digested food from the stomach reaches into small intestine, which is almost 6 meters in length and 2.5 meters in thickness. It is divided into three parts called duodenum, jejunum and ileum. It is connected with the liver. The liver is the largest gland in our body. It secrets bile juice which helps in digestion of fats by breaking them into small globules. The acidic food coming from the stomach becomes alkaline when it is mixed with bile juice, which is essential for the enzymes catalyze to break down food in an alkaline medium. The pancreatic juice secrete by pancreas contains large number of digestive enzymes, such as

The absorption of digested food in the small intestine takes place with the help of small finger like projection called villi. The villi increases the surface area for absorption of food molecules. It also contains large number of blood vessels, which carries the absorbed food molecules into the body and distributes it to the other parts. The foods from ileum is then passed onto large intestine.

The large intestine is further subdivided into two parts called colon and rectum. At the junction of ileum and colon, there is a blind outgrowth called caecum which ends in vermiform appendix. In human being it is a vestigial organ. The intake of digested food molecules by cell of the body is called assimilation. In large intestine the excessive water is absorbed into the blood through the wall of intestine and the residue is passed out in the form of faecal matters through anus.

Which among the following is an autotrophs?

Which among the following is parasite?

Which among the following has holozoic mode of nutrition?

What is the length of small intestine?