There are two types of vascular tissues in plants that helps in transportation of materials. These vascular tissues are xylem and phloem. The xylem tissues are present in roots of the plant and the phloem tissues in their shoot system Water and minerals are taken from the soil and transported to the upper part of the plant through xylem tissue. This transport of nutrient from one part of plant to other part is called translocation. The xylem tissue consists of vessels and tracheids, which carries water and minerals to all parts of the plant. This transport of water and dissolved mineral salt from the roots to the leaves is known as ascent of sap. The pressure with which water is pushed into the xylem tubes of the root is called root pressure. This absorption is a continues process and the excessive of water is excreted out through stomata. This loss of water is called transpiration. 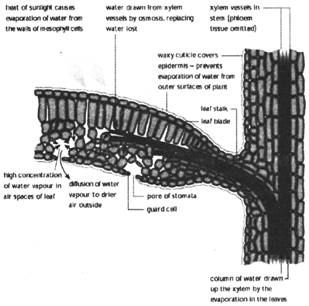 The other vascular tissue, phloem transports the prepared food material front leaves to the other parts of the plant. The phloem tissue consists of tsieve tube, companion cells and phloem parenchyma. 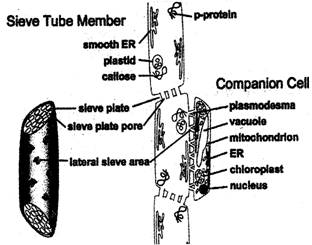 In lower animals the transportation takes place through diffusion and in higher animals, there are specialist tissue responsible for the transportation of material from one part to another. The transport system consists of blood vascular system and a lymphatic system. This system is also called the circulatory system. Blood is a connective tissue which consists of blood plasma and blood corpuscles. Blood plasma is made up of water and other substance dissolved in it. 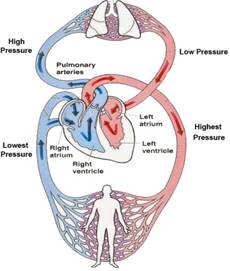 Human circulatory system, consists of heart and blood capillaries. The human heart is divided into four parts, called chambers. The four chambers of heart are left and right auricles and left and right ventricles. It is divided into two parts, by a thick layer of membrane, called septum. The left and right auricles and ventricles are connected with each other by a small opening called valves. The oxygenated blood from lungs enters into the heart through left auricles via pulmonary veins. When the left auricles contracts the blood is transferred to the left ventricles which expands. When the ventricles contracts the blood is pumped into the aorta for circulation to different parts of the body. The back flow of the blood is prevented by the closing of valves. After circulation through the body, the deoxygenated blood returns to the heart via vena cava into right auricles. When the auricles contracted the blood is forced into right ventricles through small opening called valves. This impure blood from right ventricles returns to lungs via pulmonary artery, where it is purified. This process continues throughout the life of the human beings.