In this chapter we will use the term objects and image more often. Here the objects refers to the sources of light, which falls on the mirror and reflection takes places. It may be of two types, i.e. either very small or very large. The very small objects are called the point objects. The other term is the image which is obtained when the ray of light from an objects is reflected from a reflecting surface and an object like appearance is obtained. Image is of two types: real image and virtual image. 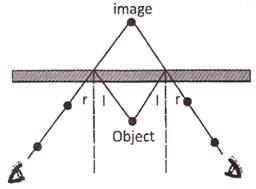 All of us might have observed that when we stand in front of the mirror our left appears right and right appears left and vice versa. It seems that as if our images have been reversed. This reversal of image is called the lateral inversion. Hence, we can say that the image formed in the plane mirror is

In the above figure, we may observe that a tree which has been placed in front of a plane mirror he left side of the tree appears right and right side of the tree appears left. We can, therefore say that the image formed in the plane mirror is laterally inverted. The most common phenomena of lateral inversion which we observe is that the word AMBULANCE on the hospital van is written in the form of its mirror image as

This is because when we are driving a car and see the hospital van coming from behind in our rearer view mirror, we can read it as AMBULANCE and give side to the van as it carries the serious patient to the hospital.

The plane mirror can be used in barbershop, bathroom, jewelry shops, at the blind turns of some of the busy roads and in periscope.