Electric generator is a device which convert mechanical energy into electrical energy. A small generator is called a dynamo which is used in bicycle. It works on the principle of application of electromagnetic induction.-When a straight conductor is moved in a magnetic field, the current is induced in the conductor. It is of two types: alternating current generator and direct current generator. An A.C. generator produces current which reverses its direction continuously after every half cycle. A simple A.C. generator consists of a rectangular coil PQRS which can be rotated rapidly between the poles of the horseshoe magnet as shown in the figure given below. 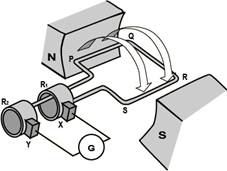