Electric motor is a device which converts electrical energy into mechanicalenergy. It works on the principle that when a current carrying conductor isplaced in the magnetic field it exerts a force on it and the coil rotatescontinuously as long as the current flows through it.

It consists of a rectangular coil PQRS. It is placed between the poles of the magnetic field in such a way that the arms PQ and RS are perpendicular to the direction of the magnetic field. The ends of the coil are connected to the two halves A and B, of the split ring. The inner sides of these split ring are insulated and attached to an axle. The external conducting edges of A and B touches two conducting stationary brushes U and V, as shown in the figure given below. 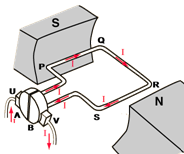 Current in the coil PQRS enters from the source through conducting brush U and flows back to the source through brush V. The current in the coil flows from P to Q in the arm PQ and in the arm RS, it flows from R to S, which is opposite to the direction in the arm PQ. The force acting on the arm PQ pushes it downwards, while the force acting on arm RS pushes it upwards. This makes the coil and the axle M mounted free to turn about an axis rotate anticlockwise. At half rotation, B makes contacts with the brushes U and A makes contacts with brush V .Thus, the direction of current in the coil gets reversed and flows along the path SRQP. The device, which helps in changing the direction of the current is called commutator half ring and here the split ring acts as a commutator. The reversal of direction of current also reverses the direction of forces acting on the two arm PQ and RS. The arm PQ which was earlier pushed downward is now pushed upward and vice - versa. Therefore, coil and the axle rotates in the same direction and this process of rotation continuous till the current flows in the coil. 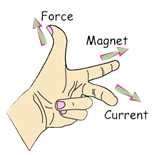