Electricity is the identity of modernity. It has really redefined the way of our life. Thus it has an important place in modern society. It is used almost at every place to facilitate modern activities.

The SI unit of current is ampere.

A current of 1 ampere means that there is 1 coulomb of charge passing through a cross section of a wire in 1 second.

Electric circuit is an incessant conducting path that consists of wires, electric bulb and switch between the two terminals of a cell or a battery along which an electric current

Potential difference is defined as the amount of work done in moving a unit charge from one point to the other point.

Where, V is potential difference

Through a high resistance wire when an electric current is passed, it becomes very hot and produces heat. This phenomenon is known as Heating Effect of current.

T = time, for which current is passed

This is known as Joule's law of heating.

Where, I is the current v is the potential difference R is the resistance.

By substituting from W = VIt, we obtain the formula for the power dissipated in an electric circuit, as follows:

This formula gives the power which is degenerated when a current I moves through a conductor when there is a potential difference V. From Ohm's law, we can write: 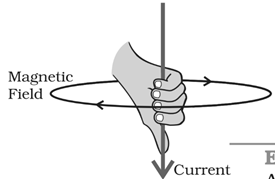 Fleming's Left-Hand -Rule for the Direction of Force 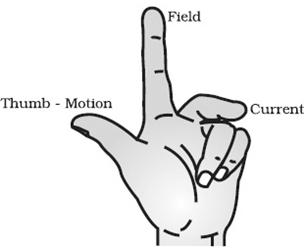 An electric motor is a device that uses electrical energy to produce mechanical energy by the interaction of magnetic fields and current-carrying conductors.

Electric motors are used to perform many tasks. They are used in industrial fans, blowers and pumps, machine tools and household appliances. They are also used in power tools, computer disk drives and many other applications. Electric motors may be operated by from a battery in a portable device" or motor vehicle. They are also operated from AC from a central electrical distribution grid.

Electric Generator are of Two Types