The good fuel has certain characteristics which are as follows:

The fuel, which is obtained by decomposition of remains of the dead plants and animals buried deep inside the earth crust, is called fossil fuel. Coal, petroleum and natural gas are all fossil fuels. The fossil fuels are also the major sources of energy for generating electricity in power plants. The natural gas consists of mainly methane with small quantities of ethane and propane. In fact it contains methane up to 95%. It is found deep under the earth crust, either along with oil or alone. It is formed under the earth by the decomposition of vegetable matter lying under water by anaerobic bacteria in absence of oxygen. The other important fossil fuel is petroleum which is dark colored viscous and foul smelling crude oil. It is found under the earth crust trapped in rocks. The crude oil petroleum is a complex mixture of several solid, liquid and gaseous hydrocarbons mixed with water, salt and earth particles. It also     contains small amount of other carbon compounds containing oxygen, nitrogen and sulphur. Since it contains mixture of alkane hydrocarbon with water, salt and earth particles, it cannot be used as a fuel in the same form. Hence it needs to be purified before being used. The process by which the different fractions of petroleum can be separated is known as fractional distillation. 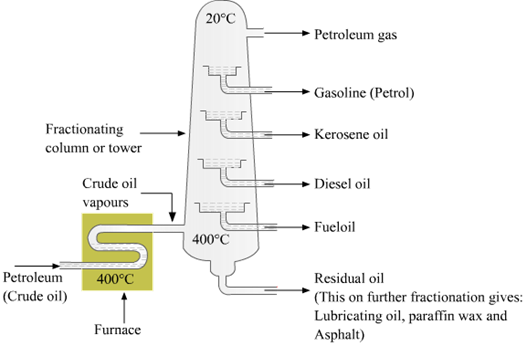