Hydroelectric power plant is the power plant in which electrical energy is produced using the kinetic energy of the water. Hydroelectricity is also the term referring to electricity generated by hydropower; the production of electrical power through the use of the gravitational force of falling or flowing water. It is the most widely used form of renewable energy. Most hydroelectric power comes from the potential energy of dammed water driving a water turbine and generator. The power extracted from the water depends on the volume and on the difference in height between the source and the water's outflow. This method produces electricity to supply high peak demands, by moving water between reservoirs, at different elevations. At times of low electrical demand, excess generation capacity is used to pump water into the higher reservoir. When there is higher demand, water is released back into the lower reservoir through a turbine. Pumped-storage schemes currently provide the most commercially important means of large-scale grid energy storage and improve the daily capacity factor of the generation system. The major advantage of hydroelectricity is elimination of the cost of fuel. The cost of operating a hydroelectric plant is nearly immune to increases in the cost of fossil fuels such as oil, natural gas or coal, and no imports are needed. Hydroelectric plants have long economic lives, with some plants still in service after 50-100 years. Operating labor cost is also usually low, as plants are automated and have few personnel on site during normal operation. 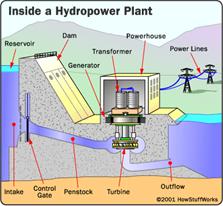 Where a dam serves multiple purposes, a hydroelectric plant may be added with relatively low construction cost, providing a useful revenue stream to offset the costs of dam operation. It has been calculated that the sale of electricity from the Three Gorges Dam will cover the construction costs after 5 to 8 years of full generation. Since hydroelectric dams do not burn fossil fuels, they do not directly produce carbon dioxide. While some carbon dioxide is produced during manufacture and construction of the project, this is a tiny fraction of the operating emissions of equivalent fossil-fuel electricity generation. However, large reservoirs required for the operation of hydroelectric power stations result in submersion of extensive areas upstream of the dams, destroying biologically rich and productive lowland and riverine valley forests, marshland and grasslands. The loss of land is often exacerbated by the fact that reservoirs cause habitat fragmentation of surrounding areas. Hydroelectric projects can be disruptive to surrounding aquatic ecosystems both upstream and downstream of the plant site. For instance, studies have shown that dams along the Atlantic and Pacific coasts of North America have reduced salmon populations by preventing access to spawning grounds upstream, even though most dams in salmon habitat have fish ladders installed.