The power plant in which the electricity is produced by burning of coal is called thermal power plant. A thermal power station is a power plant in which the prime mover is steam _ driven. Water is heated, turns into steam and spins a steam turbine which drives an electrical generator. After it passes through the turbine, the steam is condensed in a condenser and recycled to where it was heated. This is known as a Rankine cycle. The greatest variation in the design of thermal power stations is due to the different fuel sources. The energy efficiency of a conventional thermal power station, considered as salable energy as a percent of the heating value of the fuel consumed, is typically 33% to 48%. This efficiency is limited as all heat engines are governed by the laws of thermodynamics. The rest of the energy must leave the plant in the form of heat. This waste heat goes through a condenser and be disposed of with cooling water or in cooling towers. If the wasted heat is utilized for direct heating, it is called co-generation. An important class of thermal power station are associated with desalination facilities. These are typically found in desert countries with large supplies of natural gas. In these plants, freshwater production and electricity are equally important co-products. The direct cost of electric energy produced by a thermal power station is the result of the cost of fuel, capital cost for the plant, labour operation, maintenance, and such factors as ash handling and disposal. Indirect, social or environmental costs, such as, the economic value of environmental impacts, or environmental and health effects of the complete fuel cycle and plant decommissioning, are not usually assigned to generation costs for thermal stations in utility practice, but may form part of an environmental impact assessment. 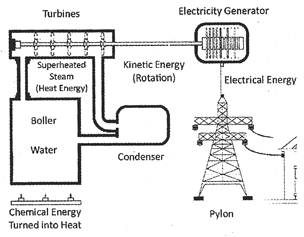 The pollution caused by thermal power plant is in large scale due to the burning of fossil fuels. These smokes cause air pollution and water pollution and also cause acid rain. Burning of coal leaves lot of ash behind and causes air pollution. It also produces acidic gases like sulphur dioxide and nitrogen oxides. These gas can cause acid rain which damages plant and crops and reduces fertility of the soil by making it acidic. It also cause problem for aquatic life by making the water of lake and river acidic. It also damages monuments like TajMahal by corroding them slowly.