Sometimes the root performs other functions other than fixation, absorption and conduction so get modified structurally. Both tap roots and adventitious roots may undergo such modifications. There are many types of root modifications.

(1) Storage roots : In some plants, the primary tap roots are modified for storing reserve food materials. The secondary roots remain thin and they are absorptive in function. The storage roots are usually swollen and assume various forms:

(i) Conical : The swollen root is broad at the base and tapers gradually towards the apex giving a shape of cone, e.g., Carrot.

(ii) Fusiform : The root is swollen in the middle and narrow towards both its base e.g., Radish (Raphanus sativus).

(iii) Napiform : The root is nearly globular or spherical in shape. The basal portion of root is much swollen which suddenly tapers towards the apex giving a top-shaped appearance, e.g., Turnip (Brassica napus, vern, Shalgam) and Beet (Beta vulgaris, vern. Chukandar). 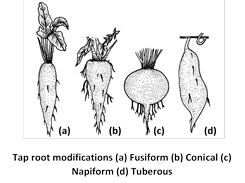 They are red in colour due to the presence of leg-haemoglobin. The nodules are inhabited by nitrogen fixing bacteria called Rhizobium leguminosarum. It converts atmospheric nitrogen into nitrates and supply them to the plant. In turn Rhizobium gets nutrients and shelter from the plant.

(ii) Pneumatophores or Respiratory roots : The roots of some plants growing in saline marshes (mangrove plants) suffer from the lack of oxygen. This is due to the water logged condition of the soil. To cope with this situation some root branches grow vertically upwards. 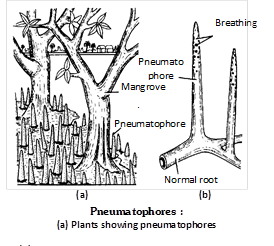 For physiological or Vital functions

(1) Storage roots : The roots where adventitious roots become swollen to store food. They are of following types :

Fasciculated roots : These are tuberous roots arising in cluster from the base of the stem. e.g., Dahlia, Ruellia (Menow weed), Asparagus etc. 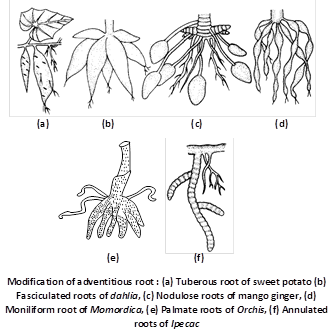 Palmate tuberous roots : In Orchis there is a pair of succulent tuberous root, one of which perishes every year while another new one is formed by its side. Such orchid roots may sometimes be of palmate shape, therefore, called palmate roots.

Annulated roots : The roots of a medicinal plant, Cephaelis ipecacuanha (Ipecac) yields emetine that looks like discs placed one above another, therefore, called annulated.

(2) Epiphytic roots : These roots are also called ‘hygroscopic roots’. These roots develop in some orchids which grow as epiphytes upon the trunks or branches of trees. They hang freely in the air and absorb moisture with the help of special sponge like tissue called velamen. Velamen is modification of epidermis. e.g., Vanda, Dendrobium etc.

(3) Parasitic or Haustorial or Sucking roots : The roots of parasitic plants, which penetrate into the host tissues to absorb nourishment, are called haustorial roots. e.g., Cuscuta (Dodder, Vern, Amarbel).

(4) Saprophytic roots (Mycorrhizal roots) : The roots are associated with fungal hyphae either superficially (ectomycorrhizae) or internally (endomycorrhizae) for absorption of water and minerals. e.g., Monotropa and Sarcodes.

(5) Photosynthetic or Assimilatory roots : These are green, aerial, adventitious roots which prepare food materials by photosynthesis are called photosynthetic roots or assimilatory roots e.g., Taeniophyllum, Trapa and Tinospora. In some epiphytes like Taeniophyllum, the stem and leaves are absent. The entire plant is represented by thin green, ribbon like roots which contain velamen. These roots absorb moisture from the atmosphere and manufacture food materials by photosynthesis.

(6) Reproductive roots : Some fleshy adventitious root develop buds which can grow in to new plants. These are called reproductive root. These roots serve as means of vegetative propagation. e.g., Sweet potato, Dahlia etc.

(2) Prop roots or Pillar or Columnar roots : These adventitious aerial roots arise from horizontal aerial branches of the trees like Ficus benghalensis (Banyan). They grow vertically downward, penetrate the soil, become thick and assume the shapes of pillars. They provide support to the spreading branches of tree. Prop roots possess lenticels for aeration.

In India, the biggest banyan tree having large number of prop roots are found at Indian Botanical Gardens, Kolkata and Kadiri (Andhra Pradesh).

(3) Buttress roots : The horizontal plank like aerial, adventitious roots that develop at the base of the stem to give additional support are called buttress roots or ballast roots, e.g., Terminalia and Salmalia.

(4) Climbing roots : The aerial adventitious roots that arise from the nodes or internodes of weak stemmed plants to climb up their support are called climbing roots, e.g., Pothos, Piper betel, Vanilla and Hedera. In Pothos and Hedera, climbing roots develop all over the stem. In Vanilla, single tendril like root arise at each node. Hence they are called tendrillar roots. In Piper betel, many short branched, adventitious roots arise at each node. These roots are called clinging roots.

(5) Floating roots : These roots develop from the nodes of floating aquatic plants like Jussiaea (=Ludwigia). They store air, become inflated and spongy, project above the level of water, make the plant light and function as floats.

(6) Contractile or Pull roots : Some roots of plants with underground stems contract or swell so that the aerial shoots are kept in a proper depth in the soil. These roots are called contractile or pull roots, e.g., Canna, Crocus, Allium, Lilium, Freesia, etc.

(7) Root thorns : In aroids like Pothos and many palms (Acanthorhiza and Iriartea) the adventitious roots become hard and pointed hence called root thorns.