The leaf is a green, flat, thin, expanded lateral appendage of stem which is borne at a node and bears a bud in its axil. It is exogenous in origin and develops from the leaf primordium of shoot apex. The green colour of leaf is due to presence of the photosynthetic pigment – chlorophyll which helps plants to synthesize organic food. The green photosynthetic leaves of a plant are collectively called foliage.

(1) The leaf is a lateral dissimilar appendage of the stem.

(2) A leaf is always borne at the node of stem.

(3) The growth of leaf is limited.

(4) The leaves do not possess any apical bud or a regular growing point.

Parts of a typical leaf

The leaf consists of three parts namely, leaf base (usually provided with a pair of stipules), petiole and leaf blade or lamina.

(1) Leaf base (Hypopodium) : Leaf base is the lower most part of the leaf meant for attachment. It acts as a leaf cushion. Some times leaf base shows different variations as follows : 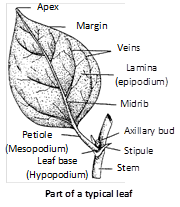 (iv) Modified leaf base : The leaf bases in few plants perform accessory functions and show modifications. In Allium cepa (Onion), the leaf bases store food materials and become fleshy. In Platanus and Robenia, the leaf bases protect the axillary buds and grow around them to form cup like structures.

Adnate stipules : The two stipules that fuse with the leaf base or petiole on either side are called adnate stipules, e.g., Arachis  and Rose.

Inter petiolar stipules : Stipules present in between the petioles of opposite leaves, e.g., Ixora and Hamelia.

Axillary stipules : Stipules present in the axil of a leaf are called axillary stipule. These are also called intrapetiolar stipule, e.g., Tabernamontana and Gardenia.

Ochraceous stipules : Membranous tubular stipules that ensheath the axillary bud and a part of internode is called ochraceous stipule. It is formed by the union of two stipules, e.g., Polygonum and Rumex.

Hairy stipules : These are hair like stipules which are dry in nature, e.g., Anacampsora.

Convolute or Bud scales : Scales which protect the buds are called bud scales. Sometimes they are the modified to stipules. The bud scales fall off as the buds open, e.g., Artocarpus and Ficus.

(2) Petiole (Mesopodium) : A petiole or leaf stalk is a cylindrical or sub cylindrical structure of a leaf which joins the lamina to the base. A leaf with a petiole is called petiolate and the one without it is called sessile.

Tendrillar petiole : In few plants the petioles are modified into tendrils and helps the plant in climbing. e.g., Clematis and Tropaeolum.

Leaf like petiole (Phyllode) : A modified petiole which is flat, green and lamina like is called phyllode. It is a photosynthetic organ. e.g., Acacia auriculaeformis (Australian babool).

Swollen or Spongy petiole : Sometimes the petiole becomes swollen and spongy due to the development of aerenchyma. This type of petioles encloses much air and helps the plant to float. It is a hydrophytic adaptation e.g., Trapa bispinosa and Eichhornia.

(3) Lamina (Epipodium) : The green expanded portion of the leaf is called the lamina. It performs vital functions like photosynthesis and transpiration.

Shape of lamina : It varies in different plants as follows. 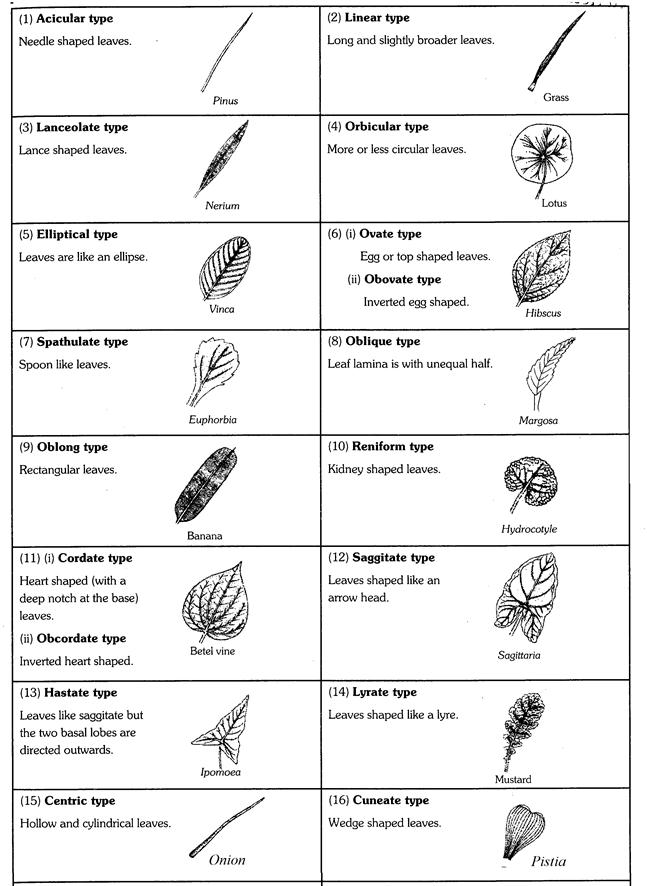 Margin of lamina : The margin of the lamina may be of different types as given.

Apex of lamina : The apex of the leaf lamina shows variations in different plants. 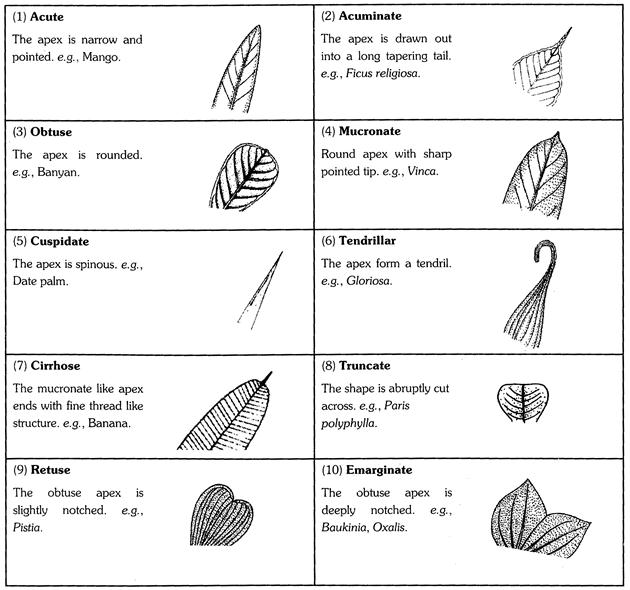 Surface of lamina : The surface of the lamina may be of many kinds.

Herbaceous : When the lamina is thin and soft.

Coriaceous : When the lamina is leathery.

Succulent : When the lamina is thick, soft and juicy.

Hygrophytic : When the lamina is very thin, membranous and spongy.

On the basis of shape of lamina, the leaves are classified into two types, namely, simple leaf and compound leaf.

(i) Pinnate compound leaves : It is the most familiar and widesperead type of compound leaf in which the rachis is elongated and bears two rows of simple or divided leaflets. The leaflets may be arranged alternately or in pairs along with the rachis. It is of following types :

Unipinnate compound leaf : Here the primary rachis is unbranched and bear leaflets on either side. Unipinnate leaves are of two types :

Paripinnate : The unipinnate leaf with even number of leaflets. They are borne in pairs. e.g., Tamarindus indica (Imli), Cassia etc.

Tripinnate compound leaf : In this type the primary rachis divides twice and produces secondary and tertiary rachii. The leaflets develops on the tertiary rachii. e.g., Moringa (Soanjana)  and Millingonia.

Decompound leaf : Here the primary rachis divides many times without any definite order. The lamina is dissected into many units. e.g., Coriandrum, Carrot etc.

Unifoliate : In this case, a palmately compound leaf is reduced to a single terminal leaflet. e.g., Citrus (Khatta), Lemon, etc.

Bifoliate : This type of leaf has only two leaflets attached side by side at the tip of petiole, e.g., Balanites roxburghii, Hardwickia binata, etc.

Trifoliate : This type of leaf has three terminal leaflets, Aegle marmelos (Wood apple, Vern, Bael), Oxalis corniculata, Trifollium (Clover), etc. These leaves differ from trifoliate imparipinnate (e.g., Lablab) in having all the three leaflets attached at the tip of petiole.

Quadrifoliate : This leaf has four leaflets attached to the tip of petiole. e.g., Paris quadrifolia, Marsilea.

The arrangement of leaves on the stem is called phyllotaxy (Gk. Phyllon = leaf; taxis = arrangement).

(1) Alternate or Spiral phyllotaxy : When only one leaf is found at each node. The leaves present at successive nodes alternate with each other. The arrangement is said to be alternate or spiral. The leaves are commonly arranged spirally around the stem. In spiral phyllotaxy, the leaves are arranged on the stem in regular vertical row. Such rows are called orthostichies. In practice the angular divergence is determined in the following manner :

In these types, if one adds up two preceeding numerators and denominators, a series is formed called Schimper-Brown Series.

(2) Opposite phyllotaxy : When two leaves are present at a node opposite to each other the type of phyllotaxy is called opposite. It is of two types :

(i) Opposite superposed : All the pair of leaves of a branch arise in the same plane so that only two vertical rows of leaves are formed. e.g., Jamun, Guava, etc.

(ii) Opposite decussate : A pair of leaves at one node stands at right angle to the next upper or lower pair so that four vertical rows are formed on the stem. e.g., Calotropis, Zinnia, Tulsi, Quisqualis.

(4) Leaf mosaic : This is a special type of arrangement of leaves. Older leaves present at the lower nodes of the stem possess longer petioles with bigger lamina and the young leaves of upper nodes bear shorter petioles with smaller lamina. e.g., Begonia, Acalypha and Sycamore.

Arrangement of leaves in bud condition is known as vernation e.g., Imbricate (irregular overlapping), contorted (twisted, regular overlapping of margins), induplicate (margin bent inwardly), equitant (conduplicate in two series, one overlapping the other completely), half equitant, supervolute (convolute leaves, one rolled over other).

It is the occurrence of more than one type of leaves on the same plant. Heterophylly is of four types :

(2) Environmental heterophylly : The heterophylly is due to change in environment including soil, temperature, humidity and air currents. e.g., Sagittaria.

Leaf tendrils : The leaves are modified into slender wiry and coiled structures called leaf tendrils. The tendril may be formed by entire leaf or a part of the leaf.

Phyllode : It is a green, expanded structure formed by the modification of petiole or rachis of leaf. Many xerophytes reduce the size of their leaves to minimize water loss. Such plant develop phyllodes to carry out photosynthesis e.g., Acacia, Melanoxylon and Parkinsonia.

Storage leaves : Leaves become fleshy due to storage of water or food materials. Such leaves are called storage leaves. They are usually found in succulent plants. In plants like Aloe, Kalanchoe and Peperomia.

Cotyledons : The mature embryo shows either one (monocotyledons) or two cotyledons (dicotyledons). Cuscuta, a parasite is included in dicotyledon. However it has no cotyledon and many cotyledons, as in gymnosperms. These cotyledons are considered as embryonic leaves which are the first leaves of a shoot system.

These plants get their nitrogenous requirement by capturing the insects. To attract, capture, kill and digest the insects, the leaves are modified into trap leaves. e.g., Nepenthes.