Nervous system begins develop early in third week of development from ectoderm. Nervous tissue also develop from ectoderm except microglial cell, develop from mesoderm. The central nervous system of vertebrates includes the brain and the spinal cord. These are derived from a longitudinal mid-dorsal ectodermal thickening of the embryo, called the medullary or neural plate. This neural plate or neural groove is converted by fusion into a closed mid-dorsal longitudinal neural tube lying above the notochord. Histologically, the embryonic neural tube exhibits three zones of cells.

(1) Germinal layer : These are actively dividing cells lining the neural canal. They form the connective tissue lining of neural canal, called ependyma, and ventricles of brain.

(2) Mantle layer : It consists of embryonic neurons or nematoblasts, forming the gray matter.

(3) Marginal layer : It consists of nerve fibres, mostly surrounded by fatty myelin sheaths, and forms the white matter. Neurons and fibres are supported by a special connective tissue of ectodermal origin, the neuroglea, cells of which become increasingly abundant and diversified in higher vertebrates. 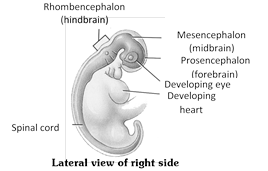 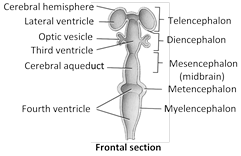 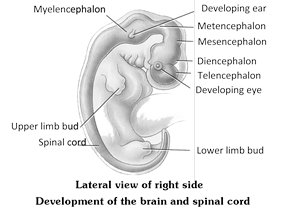