The eyes are two in number and lodged in orbits (bony socket) of skull. The eye is a hollow, spherical organ, about 2.5 cm in diameter and about 6 to 8 gram in weight. It has two parts -

(i) Eye brows : The outwardly directed hair of the eyebrows carry the sweat and rain drops trickling down the forehead to the sides to prevent their falling into the eyes.

(ii) Eye lids (Palpebrae) : In man two eyelids are present, upper is movable. They are regularly closed at short intervals to clean the cornea. This is called blinking. In frog out of two upper eyelid is immovable and lower eyelid is movable. Nictitating membrane is present in frog which protect eye in water. Movement of nictitating membrane takes place by retractor bulbi. It becomes folded by levator bulbi.

A nonfunctional vestigeal nictitating membrane, called plica semilunaris, occurs in human eyes. It remains permanently retracted at the inner angle of each eye.

(iii) Eye lashes : The eyelids bear at the free edge a row of stiff hair, the eye lashes. These check the entry of dust particles, tiny insects and rain drops into the eyes. 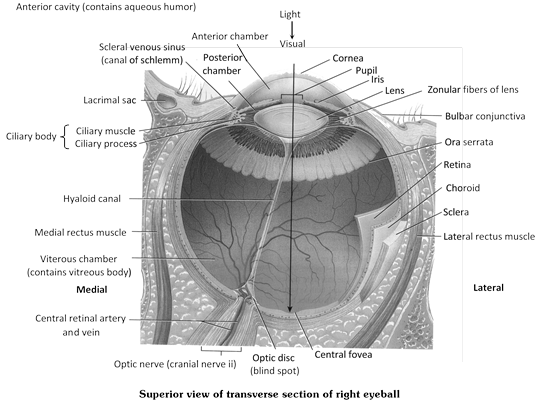 (a) Meibomian gland : The eye-lids bear at the free edge a row of meibomian gland that is modified sebaceous gland. (Act as a lumbricant).

(b) Lacrimal gland or Tear gland : It lies in the upper outer part of the orbit and  secretes a slightly saline, watery fluid that contains a bacteriolytic enzyme named lysozyme. This secretion moistens the surface of the eyeball. The excess of this secretion passes through nasolacrimal duct. It is modified sweat gland.

(d) Glands of zeis (zis) : These are modified sebaceous gland, found at base of hair follicle of eye lashes, pour lubricating fluid in hair follicle. Infection of these glands is sty.

(e) Glands of Moll : It is modified sweat gland and open into the follicles of eyelashes.

(i) Sclerotic layer (Fibrous tunica) : Outer most and opaque, fibrous and non-vascular layer easily seen as white of the eye. It is a coat of dense connective tissue made up of collagen fibers and fibroblasts. Sclera covers entire eye ball except cornea, gives shape to eye ball. Sclera in frog is cartilaginous.

(a) Cornea : In the centre, sclerotic layer it merges with the transparent round window called cornea.

(b) Conjunctiva : The cornea and exposed part of sclera are covered externally by a thin, transparent membrane the conjunctiva.

(ii) Choroid layer (Vascular tunica) : Also known as uvea middle. It is vascular layer which supplies nutrients to the eye. It is distinguished into three parts choroid, ciliary body and iris.

(b) Choroid :  It is highly vascular posterior portion of vascular tunic.  The choroid occurs in the main part of eye ball adhered to the sclerotic. (The pigment is reddish in rabbit and black, brown or bluish in man).

(c) Iris : Beyond the ciliary body, the vascular tunic sharply turns inwards, forming a circular, shelf-like diaphragm called iris. The colour of the iris is responsible for colour of eye e.g., brown, black, blue or green. In albinos, iris is deficient of pigments.

Lens : Lens is colourless, transparent and fibrous crystaline structure made up of protein (a and b crystalline protein) and enclosed in lens membrane. It is ectodermal in origin. Lens is lodged in eye ball by suspansory ligament of ciliary body. Suspansory ligaments are known as "Zonula of Zinn". In man lens is biconvex while in frog it is elliptical (subspherical).

(iii) Retina (Neurosensory tunica) : It is innermost, thin and transparent, purplish red due to the present of the eye pigment rhodopsin (in rods) or visual purple which was extracted by Kuhne (1876) and named 'Schpurpur' (Visual purple). Made up of 4 distinct layer -

(a) Cuboidal pigmented epithelium (towards choroid).

(b) Layer of rods and cones. 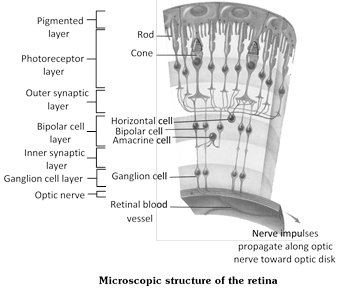 Area centralis of retina : A little part of retina that lies upon the optical axis is called area centralis. Here, the retina is very thin and contains only cone cells filled with a yellow pigment. Hence, this part is called yellow spot or maculla lutea. In man (Rabbits) and other mammals, but not in frogs, this area has a small shallow dispression called fovea centralis. The latter is the most sensitive part of an eye, i.e. the area of most acute vision. It is also claimed that the cone cells in fovea centralis are placed somewhat obliquely. So that these can form magnified images of object.

Blind spot (Optic disc) : At this point, the optic nerve turns towards the outer side, pierces through the whole thickness of the wall of eyeball, forming an optic foramen and runs to the brain. Obviously, the region of optic foramen has no retina. It therefore, does not take part in image formation and is called blind spot.

Function of the parts of human eye

(i) Mechanism of light perception : The human eye has two functional parts – Dioptric or Focussing part and Receptor part.

(ii) Focussing part : It consists of conjunctiva, cornea, aqueous humour lens and vitreous humour. These part are transparent and act as lenses. They refract the light rays passing through the eye to bring them to a focus on the retina. Maximum refraction is caused by the cornea, which places the image approximately on the retina. The lens effects fine adjustment and brings the image into a sharp focus.

(iii) Receptor part : It comprises the retina. The image formed on the retina is inverted and smaller. It converts the energy of specific wave lengths of light into action potential in nerve fibre.

(a) Pathway of sensory impulses from eye to brain : The nerve impulses generated in the retina of the eye in response to light follow a definitive path and terminates in visual cortex in each optic lobe which act as primary visual center.

The receptor cells of eye are called photoreceptor or visual cells. They are of two types - Rod cells and Cone 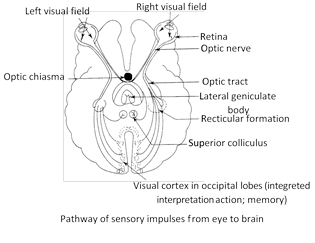 (1) Rod cells : The rod cells contain a purplish pigment called visual purple or rhodopsin. They function in dim light and at night. They produce poorly defined images. Bright light splits rhodopsin into a lipoprotein scotopsin and a carotenoid pigment retinal (retinine) a process called bleaching. The spiliting of rhodopsin depolarizes the rod cell and it releases a neurotransmitter, passing the nerve impulse via bipolar neuron and ganglion cells to the optic nerve. In the dark, rhodopsin is resynthesized from scotopsin and retinal. This process is called 'dark adaptation'. It makes the rods functional. It takes sometime for rhodopsin to be reformed. This is why on entering a dark room at daytime or on coming out of a well lighted room at night we feel blind for a while, when we go from darkness into bright light, we feel difficulty in seeing properly for a moment till rhodopsin is bleached and cones become functional.

(2) Cone cells : Cones contain iodopsin which is visual violet and made up of photopsin + retinal. The 3 types of cones are erythrolobe (775 nm sensitive tored), cyanolabe (430 nm sensitive to blue) and chlorolabe (sensitive to green 535 nm). However, if all the cone, types are simultaneously stimulated by equal amounts of coloured light than sensation for white light is perceived.

Diurnal animals are adapted to see during day light (Photopic vision) and can perceive colour. In dark, colours are not perceived. Such animals have more cones in their eye than rods.

Accommodation and types of vision

(1) Accommodation : Light passes through many refractive surfaces before it is focussed on the retina forming an inverted and true image. The main sites of refraction are cornea\[\to \]aqueous humor – iris – lens (position can be altered by ciliary body : accommodation) - posterior chamber (= vitreous humor)\[\to \]retina ( in fovea). The refractive index of the eye varies from 59 diopter (when the lens is at rest) to about 71 diopter (when lens is bulging in maximum accomodation). The accommodation reflex occurs when the eye changes its focus from a far away object to nearer one. The change in strength of the lens provides the physiological basis of accommodation. Radial and circular muscle fibres of ciliary muscles play an important role in this as they contract reflexively (parasympathetic control) and increase lens strength. The pupil constricts. This facilitates increase in sharpness of image. Ageing causes loss of accomodation.

Relationship between structures during accommodation

(i) Binocular vision : Man has binocular vision in which both the eyes are focussed on the same object but from slightly different angles. The visual fields of both eyes overlap and the foveae of both are focused on the same object. This provides depth to the images, i.e., gives stereoscopic or 3D effect and enables man to judge distances correctly.

(iii) Colour vision : It is the ability of some animals to detect colours in an object. Humans, apes, monkeys, and most fishes, amphibians, reptiles and birds have strong colour vision. The insects and crayfish also have colour vision. In vertebrates, colour vision results from the activity of cone cells. Most domestic and nocturnal mammals and sharks lack colour vision. They probably see objects in shades of grey (monochrome vision).

Range of vision : The visible range of spectrum varies in animals. Bees, ants, spiders and goldfish can see ultraviolet light, which is invisible to man.

Correspondence between Camera and Eye

Out of six, first four are rectus and last two are oblique muscles.

(i) Also known as near sightness.

(v) Image is formed before retina. Can be removed by concave lens. 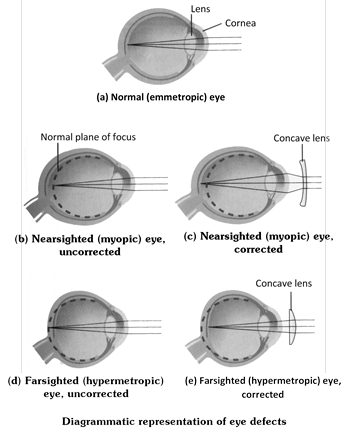 (i) Also known as hypermetropia or long sightness.

(v) Image is formed behind the retina.

(vi) Can be removed by convex lens or lens convient.

(i) Curvature of cornea become irregular and image is not clearly form.

(ii) Can be removed by cylindrical lens.

(i) It is due to defective protein metabolism.

(ii) During this lens or cornea sometime both become opaque.

(i) It is due to increase in intraocular pressure in aqueous chamber.

(ii) Operation is needed at early stage due to blockage of schlemm’s canal.

(i) It is increased in redness of eye and more secretion of watery fluid.

(ii) It is due to infection of bacteria, chlamidia trachamastis.

(iii) Due to this follicles may form in conjunctiva.

(ii) During this conjunctiva or cornea becomes keratinized.

(iii) It may lead to blindness.

(i) In this type eyeball remain in some what in bended position.

(ii) It is due to long extra ocular muscles during development of eye.

(i) During this power of accommodation of lens decreases due to age factor and defected metabolism.

(iii) Can be removed by bifocal lens.