Phonoreceptor And Mechanism Of Hearing Or Auditory Sensations And Equilibrium

Ear of mammal is divided in to 3 parts -

Tympanic membrane : It is also called ear drum and present at the junction of auditory meatus and tympanic cavity.

(2) Middle ear : The cavity of middle ear is known as tympanic cavity which is enclosed by tympanic bulla bone of skull and filled with air. Middle ear separated from external ear by ear drum and from internal ear by thin bony portion or partition with two openings known as oval and round window. 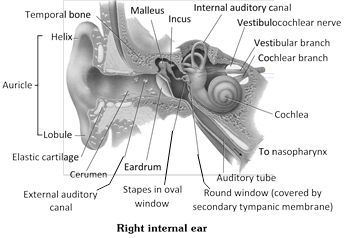 (i) Ear ossicle : A chain of three small, movable bones, the auditory or ear ossicles crosses the tympanic cavity. The outer ossicle is attached to the inner surface of the tympanic membrane. 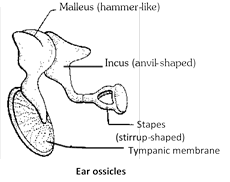 In man ear ossicles are known as H.A.S. stapes is the smallest bone of the body. In frog only stapes is present.

(iv) Eustachian tube : It is made up of elastic cartilage and it connect middle ear to nosopharynx. It maintain equilibrium in and out side of the tympanic membrane. Blocking of eustachian tube impairs hearing due to imperfect vibrations of drum. Eustachian tube is normally closed, it opens during swallowing and yawning.

(a) Fenestra ovalis : It is upper window, connect middle ear to internal ear and guarded by membrane. End of stapes is fit on the upper window. It is towards vestibule so it is also known as F. vestibuli.

(b) Fenestra rotundus : It is ventral window, connect middle ear to internal ear and guarded by membrane. It is towards scala tympani so it is also known as F. Tympani (also known as F. cochleae). 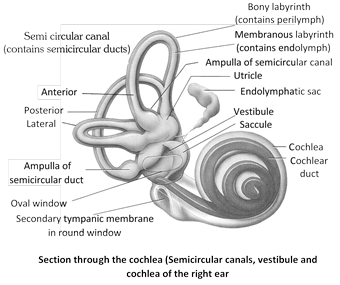 (i) Vestibule : The vestibule is a central sac like part. It further consists of 2 chambers large - Utriculus (Upper) and smaller - sacculus (lower).

They are perpendicular each other.

Crus commune : A common part of anterior and posterior semicircular canal arise from dorsal region of utriculus is known as crus commune.

Ampulla : Terminal part of the each semicircular canal is enlarged to form an ampulla.

Crista : Each ampulla has a sensory spot called crista ampullaris or simply crista, for equilibrium. 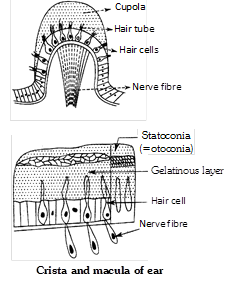 (b) Sacculus : It is a lower chamber of vestibule. From the lower part of the sacculus arises a short tube, the ductus reuniens, that joins the cochlear duct.

Ductus endolymphaticus : It is filled with endolymph and arises from the junction of utriculus and sacculus.

Macula : are present in utriculus and sacculus. it is a group of sensory cells. In man (Rabbit) 2 maculas are present. (A crista resembles a macula in structure except that lies on an elevation, the acoustic ridge, its sensory cells have longer "hair", and its gelatinous mass is dome shaped, lacks otoliths and is called cupula.)

Difference between Crista and Macula

Otolith : Also known as otoconia made up of protein and calcium carbonate  and present in endolymph.

(ii) Cochlear duct and Cochlea : It is a spirally coiled tube (\[23\]coiling) which is connected to sacculus by a short duct. It is divided into 3 chambers by 2 membranes.

(d) Reissner's membrane : Present at the roof of scala media, it saparate S.M. to S.V. 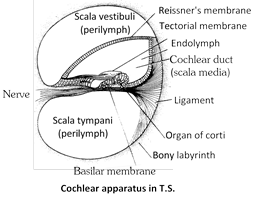 (e) Basilear membrane : Present at the base of S.M. It is thicker than Reissner's membrane and it separates S.M. to S.T.

(g) Helicotrema : A aperture present in scala media which connect scala vestibuli to scala tympani is known as helicotrema.

(i) Organ of corti : Discovered by Italian anatomist Alfanso-Corti. Also known as ridges of corti which are present in basiler membrane. Organ of Corti contains a variety of cells. They receives nutrients from endolymph. The cells of organ of Corti are  following types - 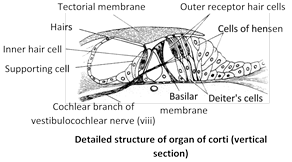 Characteristics of cells of organs of Corti

Vone Beskey won the Nobel prize for his work on ear. The mechanism found in ear involve two unrelated functions : Hearings and equilibrium.

(1) Hearing : The ear not only detects sound but also notes its direction, judges its loudness and determines its pitch (frequency) sound waves are collect by the pinna and directed inward through the external auditory meatus (frequency 430 cycle per second). Here they strike the tympanic membrane. The latter begins to vibrate at the same frequency as that of the sound waves. From the tympanic membrane, the vibration are transmitted across the tympanic cavity by the ear ossicles to the membrane of the fenestra ovalis. The force of vibrations is considerably increased in the middle ear by leverage of the ossicles and also by much smaller surface area of the membrane of fenestra ovalis than that of the tympanic membrane. (The frequency is 2400 cycle/sec). Increase in frequency is important because the sound wave are transmitted from air to a fluid medium. The membrane of fenestra ovalis transmits the vibrations to the perilymph of the scala vestibuli and hence via Reissner's membrane to the endolymph in the scala media. From here the vibrations are transferred to the basilar membrane and the perilymph in the scala tympani.

Vibration of the endo lymph of the scala media cause the basilar membrane of this chamber vibrate. Vibrations of the basilar membrane make the "sensory hair" of receptor cells in the organ of corti move in the overlying gelatinous membrane (Tectorial membrane) and get distorted. This stimulation causes depolarisation of the receptor cells and initiation of nerve impulse in the fibres of the auditory nerve. The nerve impulse travels via relay centers e.g. spiral ganglion\[\to \]cochlear nuclei\[\to \]superior auditory nuclei\[\to \]inferior colliculi\[\to \]auditory cortex of cerebrum (The cerebral cortex interprets the impulses as sound). The various steps in the mechanism of hearing 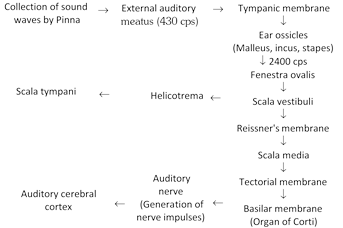 Human ear can hear a frequency of 500 to 5000 hertz (Hz; 1 Hz = 1 cycle/second). However, it can hear the complete range of frequencies from 20 – 20,000 Hz only with intense sound. Sound energy is measured in terms of units called decibels (dB). Sounds in our city homes average \[4050\,\,dB,\]  but street noise averages \[7080\,\,dB.\] Sounds up to 80 dB are considered bearable by man, but higher sound intensity are hazardous, causing nervous stress, irritability, increased blood pressure etc. Non stop noise of 90 or more dB produces temporary deafness. 160 dB sound can cause total deafness by rupturing our ear drum. Sound becomes uncomfortable to normal ear at about 120 dB. 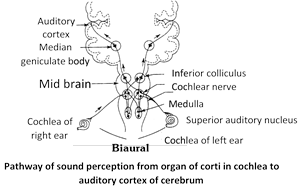 (i) Static equilibrium and linear acceleration : Maculae detect changes in the head (or body) with respect to gravity (static equilibrium) and in the movement in one direction (linear acceleration). With a change in the position of the body, the otoliths, being heavier than the endolymph, press upon the sensory hairs of the maculae. This stimulates the sensory cells which initiates nerve impulse in the fibres of the auditory nerve. The macula of utricle responds to vertical movements of the head, and the macula of saccule responds to lateral (sideways) movement of the head.

On rapid forward movement, the otoliths, because of having greater inertia than the surrounding endolymph, lag behind and press back the sensory hair, stimulating the sensory cells to generate nerve impulses.

(ii) Dynamic equilibrium : Cristae detect turning or rotational movements of the head (angular acceleration). When the head is turned, the endolymph in the semicircular ducts, due to its inertia, does not move as fast as the head and the sensory cells of the crista, but continues to move after the head stops moving. Because of this difference in the rate of movement, the sensory hair of the cristae are swept through the endolymph and become bent over. This disturbance stimulates the sensory cells and sets up action potential in the fibres of the auditory nerve, which transmits it to the brain. Since the three semicircular ducts are arranged in three different planes, a movement of the head in any direction will stimulate the sensory cells of at least one crista.

(2) Meniere's disease : Loss of hearing due to defect in cochlea.