Flowering in a plant occurs at a particular time of the year and controlled by many morphological and environmental conditions. Two important controlling factors are photoperiod or light period, i.e., photoperiodism, low temperature i.e., vernalization.

(1) Photoperiodism (Light period) : The effects of photoperiods or daily duration of light periods (and dark periods) on the growth and development of plants, especially flowering is called photoperiodism. The role of photoperiodism in the control of flowering was demonstrated for the first time by W.W Garner and H.A. Allard (1920). They observed that Maryland Mammoth variety of tobacco could be made to flower in summer by reducing the light hours with artificial darkening. It could be made to remain vegetative in winter by providing extra light. On the basis of length of photoperiod requirements of plants, the plants have been classified into following categories. 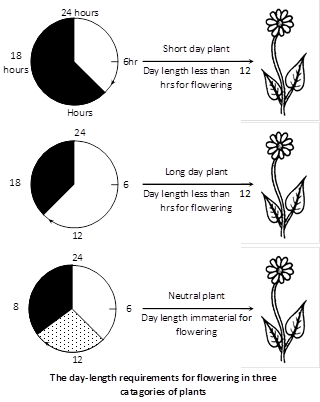 (iv) Intermediate plants : These plants flower only under day lengths within a certain range usually between 12-16 hours of light but fail to flower under either longer or shorter photoperiods. e.g., Mikania scandens, Eupatorium hyssopifolium and Phaseolous  polystacous.

(a) Amphiphotoperiodic plants : Such plants remain vegetative on intermediate day length and flower only on shorter or longer day lengths. e.g., Media elegans.

Critical period : Critical photoperiod is that continuous duration of light, which must not be exceeded in short day plants and should always be exceeded in long day plant in order to bring them to flower. There is no relation with the total day length. Thus, the real distinction between a SDP and LDP is whether flowering is induced by photoperiods shorter or longer than the critical period. The critical day length for Xanthium (a short day plant) is 15. 6 hours and that for Hyoscymus niger (a long day plant) is about 11 hours, yet the former is SDP as it flowers in photoperiods shorter than its critical value, whereas the latter is LDP requiring photoperiods longer than its critical value. Both Xanthium and Hyoscymus niger flower with 14 hours of light per day. Thus, day length in which a plant flowers is no indication of its response class in the absence of further information.

Skotoperiodism (Dark period) : When photoperiodism was discovered, the duration of the light period was thought to be critical for flowering. Subsequently, it was found that when the long night period was interrupted by a brief exposure to light, the short day plants, failed to flower. Thus, for flowering, these plants require a long night or critical dark period rather than a short day length. Similarly, long day plants respond to nights shorter than the critical dark period. Curiously, they do not need an uninterrupted dark period. Therefore, a short day plant is also called long night plant and a long day plant as a short night plant. 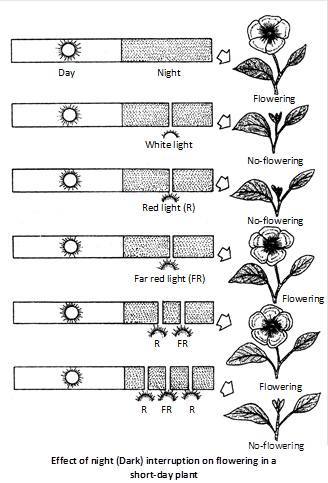 In the night interruption experiments, when the short day plants were exposed to a flash of light before achieving a critical dark period, flowering was prevented. It is called light break reaction.

Photoreceptor : The chemical which perceives the photoperiodic stimulus in leaves is phytochrome. The wavelengths of light are absorbed by the leaves. This becomes evident by the fact that defoliated (leaves removed) plant does not flower. Presence of even a single leaf is sufficient to receive required amount of photoperiod. Partially mature leaves are more senstitive to light while very young or mature leaves are much less sensitive to photoperiodic induction. 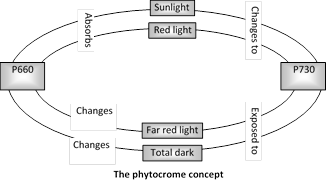 Therefore, in SDP interruption of dark periods with a flash of red light converts Pr into Pfr and flowering is inhibited.

Importance of phytochrome : Phytochrome is located in plasmamembrane.  Phytochrome far red (Pfr) form is considered to be biologically active form and is responsible to initiate a number of physiological process such as.

(1) Elongation of stem and leaves.

(2) Plastids morphology and differentiation of stomata.

The florigen complex (Flowering hormone): When the proper amount of light is perceived by leaves, they produce a chemical (flowering hormone), which undergoes stabilisation in dark. Later on, this chemical passes to shoot apex and causes its differentiation into flowering shoot.

Chailakhyan (1936) a Russian investigator on photoperiodism, proposed that it be called ‘florigen’. According to him (1958) the “Florigen complex”, the true flowering hormone includes two groups of substances formed in leaves :

Gibberellins : Which are necessary for formation and growth of stem.

Anthesins : Substances which are necessary for flower formation.

Photomorphogenesis : When plants are grown in continuous darkness they become etiolated i.e., such plants are longer, weaker,  having yellowish half opened leaves, while light grown plants do not show such conditions. When etiolated plants are kept in light they gradually develop green colour and become normal. The effect of light in reversing etiolation involves two kinds of action; one the biochemical level for the synthesis of the chlorophyll and secondly at the level of morphogenesis light acts to promote expansion of the leaves and inhibits elongation of the internodes. This phenomenon is called photomorphogenesis and is independent of the direction of light.

The action spectrum of photomorphogenesis reveals that plants are most sensitive to red light, but blue light is ineffective.

(2) Vernalization : Russian agronomist Lysenko coined the term vernalization (1929-30). According to him vernalization may be defined as the method of inducing early flowering in plants by pretreatment of their seeds at low temperatures. Chourad (1960) has defined it as the acquisition or acceleration of the ability to flower by chilling treatment. The low temperature requirement for flowering was first noticed by Klipport (1857) while working with winter varieties of cereals such as wheat, barley, oat and rye. He observed that, these varieties when sown in spring failed to flower the same year but grow vegetatively. Such winter varieties, when sown in the autumn, they flowered in spring of the same year.

(ii) Duration of low temperature treatment : It varies from species to species from a few hours to a few days.

(iv) Water : Proper hydration is must for perceiving the stimulus of vernalization.

(v) Oxygen : Aerobic respiration is also a requirements for vernalization. The stimulus has been named as vernalin (reported by Mechlers).

(i) Thermostage : Germinating seeds are treated with 0-5oC in presence of oxygen and slight moisture. The seed dormancy is broken.

(ii) Photostage : The stage is very essential to initiate the reproductive phase. After vernalization plants must be subjected to a correct photoperiod in order that they may produce flowers.

(i) Vernalization is believed to overcome some inhibitor and induce synthesis of growth hormones like gibberellins.

(ii) It reduces the vegetative period of plant.

(iii) It prepares the plant for flowering.

(iv) It increases yield, resistance to cold and diseases.

(vi) Vernalization is beneficial in reducing the period between germination and flowering. Thus more than one crop can be obtained during a year.