"The loss of water in the form of vapours from the aerial parts of a plant is called transpiration". Maximum transpiration occurs in mesophytic plants.

About 98 percent of the water absorbed by land plants evaporates from the aerial parts and diffuse in to the atmosphere.

Differences between transpiration and evaporation

(i) Cuticular transpiration : Cuticle is a layer of wax like covering on the epidermis of leaves. If it is thin, upto 20 percent of the total transpiration may take place through it, but with the increase in its thickness (e.g., in xerophytes), the water vapour loss is reduced.

(3) Structure of stomata : Stomata are the microscopic openings most commonly found in the leaves. These may be present in young stems and sometimes even in fruits (e.g., citrus, banana, cucumber, etc.). Each stomatal opening is surrounded by two specialized epidermal cells, called as the guard cells. 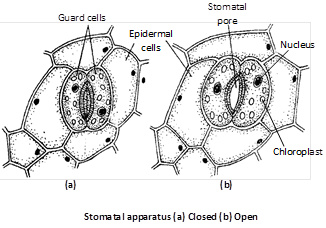 Because of their small size, the guard cells are rapidly influenced by turgor change and thus regulate the opening and closing of stomata. The guard cells of dicot leaves are kidney-shaped or raniform whereas those of monocots (family Gramineae) are dumbel-shaped or elliptical. The guard cells are surrounded by epidermal cells called as the accessory cells or subsidiary cells. These are different from the normal cells of epidermis having chloroplasts. These are also different from other cell as these develop from same cell from which guard cells develop. The stoma with subsidiary cells is called stomatal apparatus. Each stoma leads into a air space called sub stomatal cavity. Each guard cell has a thin layer of cytoplasm along the cell wall and a large vacuole. Its cytoplasm contains a distinct nucleus and several chloroplasts. The cell wall of guard cells around the stomatal pores are thickened and elastic due to presence of a secondary layer of cellulose.

(5) Types of stomata : On the basis of orientation of subsidiary cells around the guard cells, Metcalfe and Chalk classified stomata into following types :

Anomocytic : The guard cells are surrounded by a limited number of unspecialized subsidiary cells which appear similar to other epidermal cells. e.g., in Ranunculaceae family.

Anisocytic : The guard cells are surrounded by three subsidiary cells, two of which are large and one is very small. e.g., in Solanaceae and Cruciferae families.

Paracytic : The guard cells are surrounded by only two subsidiary cells lying parallel to the guard cells e.g., Magnoliaceae family.

Diacytic : The guard cells are surrounded by only two subsidiary cells lying at right angles to the longitudinal axis of the guard cells. e.g., Acanthaceae and Labiatae families.

Actinocytic : The guard cells are surrounded by four or more subsidiary cells and which are elongated radially to stomata.

Epistomatic (Water Lily type) : Stomata are present only on the upper epidermis of leaves. These are found in water Lily, Nymphaea and many other floating hydrophytes.

Hypostomatic (Apple or Mulberry type) : Stomata are present only on the lower surface of leaves. e.g., Apple, mulberry, peach and walnut.

Amphistomatic : Stomata are present on both the surfaces of leaves. It can further be subdivided into two types :

(ii) Isostomatic (Oat type) : The stomata are equally distributed on both the surfaces of leaves. These leaves are also called as isobilateral leaves. These are found in monocots e.g., Oat, maize, grasses, etc.

(7) Daily periodicity of stomatal movement : Loftfield (1921) classified the stomata into four types, depending upon the periods of opening and closing.

Potato type : The stomata close only for a few hours in the evening, otherwise they remain open throughout the day and night e.g., Cucurbita, Allium, Cabbage, Tulip, Banana etc.

Barley type : These stomata open only for a few hours in the day time, otherwise they remain closed throughout the day and night, e.g., Cereals.

Equisetum type : The stomata remain always open through out the day and night. e.g., Amphibious plants or emergent hydrophytes.

Several theories have been put forth to explain the opening and closure of stomata. Which have been discussed below:

Photosynthetic theory : According to Von Mohl (1856) the chloroplasts present in guard cells prepare osmotically active substances by photosynthesis. As a result, their osmotic pressure increases and their turgor pressure increases due to endosmosis. This results in opening of stomata.

Objection : In many cases, chloroplasts of guard cells are poorly developed and incapable of performing photosynthesis.

Starch \[\rightleftarrows \] sugar interconversion theory : According to Lloyd (1908), turgidity of guard cells depends upon interconversion of starch and sugar. This fact was supported by Loftfield (1921) who found that guard cells contain sugar during day time when they are open and starch during night when they are closed. Later Sayre (1926) observed that stomata open in neutral or alkaline pH which prevails during day time due to constant removal of \[C{{O}_{2}}\] by photosynthesis. They remain closed during night when there is no photosynthesis and due to accumulation of \[C{{O}_{2}},\] carbonic acid is formed which causes the pH to be acidic, Sayre thus proposed that interconversion of starch and sugar is regulated by the pH. Sayre's hypothesis was supported by Scarth (1932) and Small et al (1942). This hypothesis was further supported by detection of the enzyme phosphorylase in guard cells by Yin and Tung (1948). This enzyme is responsible for starch-glucose interconversion.

(1) Starch\[\rightleftarrows \]Sugar interconversion is a slow process which can not account for rapid stomatal movement.

(2) Starch or other polymerised polysaccharide do not occur in onion plant where stomatal movement occurs.

(3) Glucose is not detectable in the guard cells when stomatal opening occurs.

(4) The theory could not explain the extra-effectiveness of blue light at the time of stomatal opening.

Stewards modification : Steward (1964) said that glucose-I-phosphate should be further converted into glucose as glucose-I-phosphate is not capable of changing osmotic pressure. In this process of stomatal opening and closing, enzymes like phosphorylase, phosphoglucomutase, phosphatase and hexokinase are present in guard cells. 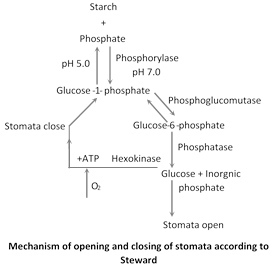 Glycolate theory : Zelitch (1963) proposed that stomata open due to production of glycolic acid by photorespiration in guard cells under low concentration of \[C{{O}_{2}}.\]b The glycolic acid thus produced is converted into soluble carbohydrates which increase the O.P. of guard cells.

(1) It fails to explain the opening of stomata in dark (e.g., in succulents).

(2) In some plants stomata have been found to remain closed even during day times.

(3) It fails to explain the effect of blue light on stomatal opening.

Proton transport theory : It was proposed by Levitt (1974). According to this theory stomatal opening and closing can be explained in the following manner :

(1) During day time due to rapid rate of photosynthesis, the concentration of \[C{{O}_{2}}\] decreases in the guard cells. As a result their pH is increased. At higher pH, starch in the guard cells is converted into organic acid by the enzyme phosphoenol pyruvate carboxylase (PEPC). This enzyme was discovered by Willmer etal. (1973). It can convert several other carbohydrates into organic acids.

(1) During night photosynthesis stops which results in increased concentration of \[C{{O}_{2}}\] which causes lowering of pH.

(4) At low pH, organic acids are converted back into starch by PEPC.

(5) The O.P. of guard cells decreases and water moves out of them into subsidiary cells by the process of exosmosis, thus decreasing their turgor pressure.

(6) The guard cells become flaccid and the stomata close.

Stomatal opening in succulent plants (Scotoactive stomata) : The stomata in succulent plant or CAM plants (like Opuntia, Bryophyllum etc.) open during night (darkness) and remain closed during the day time and found in lower surface. This type of stomatal opening is called 'Scotoactive type' and the stomata which open during day are called as photoactive. Stomata closed and open due to the activity of water. This types of stomata is known as hydroactive stomata. The opening and closing mechanism of scotoactive stomata was explained by Nishida (1963). In succulent plants, during night, there is incomplete oxidation of carbohydrates and accumulation of organic acids (e.g., malic acid) without release of \[C{{O}_{2}}.\]During day time the accumulated organic acids breakdown rapidly releasing excess amount of \[C{{O}_{2}}\]for photosynthesis as well as to keep the stomata closed.

Temperature : It affects the rate of transpiration only indirectly. Increase in the temperature of the air decreases the humidity of the air and therefore more water is vapourised and lost from the transpiring surface.

Available soil water : If the available water in the soil is not sufficient the rate of transpiration is decreased. Under internal water deficiency the stomata are partially or completely closed.

S = No. of stomata per unit area

E = No. of epidermal cells in unit area.

Leaf structure : The anatomical features of leaves like sunken or vestigial stomata; presence of hair, cuticle or waxy layer on the epidermis; presence of hydrophilic substances such as gums, mucilage etc. in the cells; compactly arranged mesophyll cells etc. help in reducing the rate of transpiration.

Root shoot ratio : According to Parker (1949) the rate of transpiration is directly proportional to the root-shoot ratio.

Age of plants : Germinating seeds show a slow rate of transpiration. It becomes maximum at maturity. However, it decreases at senescence stage.

Orientation of leaves : If the leaves are arranged transversely on the shoot they lose more water because they are exposed to direct sunlight. If placed perpendicularly they transpire at slower rate.

(1) Transpiration is important for plants because it directly influences the absorption of water from the soil.

(2) Transpiration exerts a tension or pull on water column in xylem which is responsible for the ascent of sap.

(3) Transpiration helps in the movement of water and minerals absorbed by the roots to the other parts of the plant.

(4) The evaporation of water during transpiration contributes to the cooling of leaves (and also the surrounding air) and protects leaves from heat injury particularly under conditions of high temperature and intense sunlight.

(1) Transpiration often results in water deficit which causes injury to the plants by desiccation.

(3) Many xerophytes have to develop structural modifications to reduce transpiration. These modifications are extra burden on the plants.

(4) Excessive rate of transpiration leads to stunted growth of plants.

(5) Since approximately 90 percent of absorbed water is lost through transpiration, the energy used in absorption and conduction of water goes waste.

Metabolic inhibitors : They reduce transpiration by causing partial closure of stomata without influencing other metabolite processes, the most important of these inhibitors are phenyl mercuric acetate (PMA), and abscissic acid (ABA).

Film forming anti-transpirants : They check transpiration by forming a thin transparent film on the transpiring surface. They are sufficiently permeable to carbon dioxide and oxygen to allow photosynthesis and respiration, but prevent movement of water vapour through them. The important chemicals of this group are silicon emulsion, colourless plastic resins and low viscosity waxes.

Guttation : The process of exudation of liquid drops from the edges of leaves is called guttation or the process of the escape of liquid from the tip of uninjured leaf is called guttation. It was first studied by Bergerstein in 1887. Usually it occurs through stomata like pores called hydathodes. Exudation may some time occur from stem through the scars of leaves and lenticles. Guttation usually occurs when the plant is put in more saturated atmosphere. 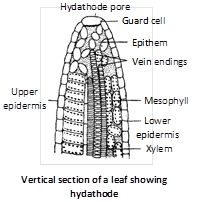 Hydathodes are generally present at the tip or margin of leaves. These pores are present over a mass of loosely arranged cells with large intercellular spaces called epithem. This mass of tissue lies above a vein ending. The xylem of a small vein usually terminates among the thin walled parenchymatous cells of epithem. Guttation is caused due to root pressure. It is found in 115 families and 333 genera of woody and herbaceous plants. e.g., Garden nasturtium (Tropeolum), Oat (Avena), Colocasia etc. growing in moist, warm soil and under humid conditions. When the absorption of water exceeds that of the transpiration, hydrostatic pressure is built up in xylem ducts. As a result, water is pushed in the xylem ducts and comes out through the hydathodes. The water of guttation contains several dissolved inorganic and organic substance.