Lac insect feeds upon the sap of its host plant like any other sap sucking insect. It is found in India and Philipine islands.

Male and female lac insects : The female is more degenerated. It has a bag -like body with a small reduced antenna. The eyes legs and wings are lost during metamorphosis. The male lac insect is red in colour. It has an incipient head with antennae and eyes. The thorax has three pairs of legs and abdomen carries genital sheath, penis and a pair of long caudal setae, one on either side of genital sheath.

The wings may be present or absent. Because of the absence of mouth parts, the insect is incapable of feeding. 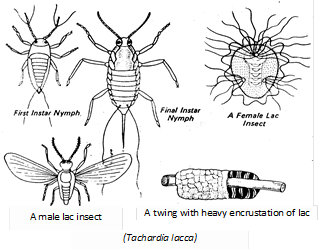 Each larva is boat-shaped in appearance and is about 1/2 mm in length. Its head bears paired antennae and the ocelli. The mouth parts are of piercing and Sucking type with maxillae and mandibles together forming the sucking tube or proboscis. Its thorax is three segmented and each thoracic segment carries a pair of walking legs. The abdomen bears a pair of long caudal setae.

Attachment of larvae to new shoots : The larvae on emergence craw1 on the twigs of any one of the host trees mentioned earlier and settle down on the undersurface of new shoots. These prefer young succulent shoots. These force their proboscis through the bark and insert it into the phloem tissue and start feeding. Here these metamorphose into the adult insects and by secreting lac enclose themselves into the chambers.

Composition of lac : Lac is a complex substance having large amount of resins, together with sugar, water and other alkaline substances. The percentages of various constituents are as given below

Lac Cultivation : In order to obtain lac, lac insects are cultured and the technique of lac production is known as the lac culture. It involves proper care and regular pruning of the host plants, propagation of insects, and collection and processing of lac, For the purpose of propagation the older branches containing crusts are tied with new branches and this method is called oculation. When new crusts are formed, the old twigs are removed (approximately \[20-30\,\,cm\]long) and this is known as harvesting.

Extraction of Lac : The largest yield of lac and dye are obtained by harvesting the infested twigs while females are still living. The harvesting is done twice a year in June and November. The encrused twigs are pruned and lac scrapped from them. This is known as stick lac. It is grounded and sieved. The resulting granular lac is called seed lac, and the fine particles the dust lack. The seed lac is washed, melted spread out in a thin layer and dried thus forming the shellac of commerce. The dust lac is used for making toys, shellac is used in the preparation of varnishes, paints and polishes; in making gramophone records and in filling ornaments like bangles and bracelets. It is used as insulating material.

(1) Lac crops is reported to be damaged by squirrels, rats, and monkeys.

(4) Predators : Eublemma amabilis and Holcocerea pulverea are the two lepdoteran predators that damage about 35% of the lac cells. Their females lay eggs on or near the encrustation. The larvae that hatch out bore through the lac deposit and feed on lac insects.

Precautions to be Taken During Lac Culture

(1) Lac intended to be used as brood should be cut at or near the swarming period, never more than one week before.

(2) Lac to be used as brood must be healthy and resistant to the parasite and predator's attack.

(3) Lac used as brood should be removed after a maximum period of 3 weeks from the date of swarming.

(4) All brood lac after use and the lac cut from the tree should be scrapped from the sticks to destroy larvae and pupae of predators of parasites.

(5) Lac should not be stored after cutting. It should be treated as soon as possible.

(6) Fumigation and water immersion immediately after cutting are also helpful in the disinfection of Lac by insects.

Cultivation of Lac in India : India has monopoly in the production of lac. It is about 75% of the world's total output. Approximately 40 lakh ponds of lac is produced. Bihar M.P. and west Bengal are major lac producing states in India. Thailand is major competitor of India as it shares 25% of the total exports. India exports about 1,80,400 kg. of lac The use of lac is being gradually replaced by plastic.