History of Pearl Industry : For the first time the idea of pearl industry was evoked in Japan which was carried out in the Bay of Japan located at South coast of Hansoo. But in Japan, pearl culturists feel difficulty due to unfavourable climatic conditions. Kokichi Mikimoto (1858-1954) is referred to be the father of pearl industry. Pearl is a concretion formed by molluscs. It consists of nacre or mother of pearl. It is characterised by iridescence and translucence.

Pearls is produced by the marine molluscs such as pearl oyster and mussel.

Types of pearls : Pearls are of seven types. They are the following -

(1) Lingha pearl : This is the best quality pearl obtained from marine oysters.

(3) Baroque pearls : These are spherical pearls formed inside the body.

(4) Blister pearls : These are pearls attached to the shell. They are half-spherical in shape.

(5) Oriental pearls : These are true pearls with a great lustre, beauty and a smooth surface.

(6) Natural pearls : These are the pearls obtained from pearl oysters of deep oceans.

(7) Cultured pearls : These are the pearls obtained from cultivated species of pearl oysters.

The pearl is formed of nacre. The nacre is formed of two substances namely a calcium carbonate which is in the form of argonite or calcite and an albuminoid substance called conchiolin/colchitin

Pearl-producing animals : Pearls are produced by bivalve molluscs. There are marine as well as fresh water animals. 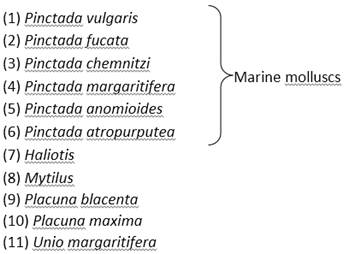 Cultivable species : Pearls are intensively produced by cultivating pearl oysters. The most important molluscs cultivated for pearls are Pinctada vulgaris.

Biology of pearl oysters  : Pearl oysters are sedentary animals. They are attached to rocks. They have two valves. One valve is cemented to the rocks and the other free. They spawn twice in a year. The eggs are hatched into free swimming larvae. The larvae sink to the bottom of the water and develop into young oysters called spats. They grow to their maximum size in four or five years.

Pearl formation : The pearl oysters produce pearl as an adaptation against outside materials. When a foreign material such as a sand, grain or a parasite happens to enter the body it adheres with the mantle. The mantle epithelium at once grows over the material in the form of a sac and encloses it. This mantle epithelium starts secreting concentric layers of nacre around the foreign material. The completed structure is called pearl. 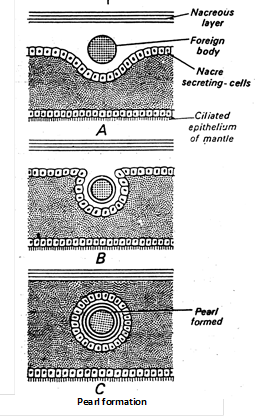 (1) Collection of oysters : Oysters for pearl culture are obtained by three methods. They are as follows :

(i) Pearl oysters are collected from the bottom of the sea.

(ii) Spats (young oysters) are collected by placing cages in spat-falling areas of the sea.

(iii) In the laboratory eggs of pearl oysters are fertilized and young once are obtained.

(2) Preparation of graft tissue : The piece of tissue which is inserted into the oyster is called graft tissue It is cut off  from the mantle of another oyster. The graft must be in the form of a square of \[2\times 2\,\,mm\]in size.

(3) Preparation of nucleus : The nucleus is a foreign material which is inserted into the oyster. It is in the form of 2 mm in diameter. It is prepared from the shell of molluscs

(4) Implantation : The oyster is placed on a table. The foot is exposed. A small incision is made on the foot. On this incision the graft tissue is placed. The nucleus is placed on the tissue. Then the oyster is released in cages. The entire operation should be completed in 30 minutes.

(5) Rearing of oysters : The operated oyster are placed in cages and the cages are suspended from rafts in the sea. This type of culturing oysters is called raft culture.

(6) Harvesting : Pearls attain their maximum in three years. After three years, the oysters are removed from cages and the pearl is taken out. Chemically pearl is made up of \[CaC{{O}_{3}}\]and conchiolin.

Quality of pearl : The pearls obtained are of variable shaped and sizes. They may be white, or cream red or pink red in colour. The spherical pearls of rainbow colour are rarely found. The best quality of pearl is known as ‘lingha pearls’ and obtained from marine oysters.