A computer is a machine, which manipulates data according to a list of instructions. We use computers for so many things, like playing video games, solving mathematical problems, drawing pictures, watching movies, listening to music, using internet e-mailing, etc.

The device by which we type the letters, give commands to the computer is an input device called CPU (Central Processing Unit). A part of a computer performs its internal task and computers display information through output devices. Therefore, a computer has three basic parts, Input, CPU and Output. 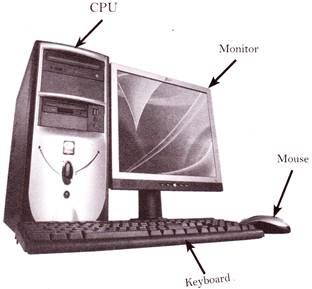 Few important features of a computer are:

v  It works on electricity.

v  It makes our work easier.

v  It is very fast as compared to human beings.

v  It is very accurate, it never make mistakes.

v  It never gets tired.

v  It has in-built memory where it can store a large number of data.

Drawbacks of a Computer

v  Computer has no feelings.

v  It cannot work on its own. It needs a person to work on it and to give instructions to it

What is a Machine?

v  A machine is a tool which makes our work easier.

v  It saves our time and energy.

Example of Machines are:

A television set is used for entertainment.

An iron is used to iron clothes.

A car is used to for travelling.

A mobile is used for making phone calls.

v  Machines work faster than human beings and are made by man.

v  Computer is a machine.