There are two paper boxes of oranges each contains 24 oranges. How many oranges are there in all?

The following are the steps for the multiplication of two numbers. For example multiply 12 and 2.

Write down the numbers to be multiplied in columns as shown below:

Multiply ones as below:

It is written as:

Multiply tens as shown below:

1st multiply any two numbers and then multiply the result with the remaining number. 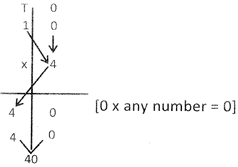 Let?s see the examples given below:

An egg tray contains 12 eggs. How many trays are required for 36 eggs?

A factory produces 15 items in a day. How many items it will produce in a week if Sunday is a holiday?

Let?s see the examples given below:

To solve the problem, multiply the quantity of onions with its cost.

To solve the problems based on multiplication series, we require to remember tables of numbers.

Fill in the blank with suitable number

(i) Division is repeated subtraction.

(ii) Division is inverse of multiplication,

(iii) The symbol of division is horizontal line and two dots (-).

(iv) The number which gets divided is called the DIVIDEND, denoted by capital ?D?

(v) The number which divides the dividend is called the DIVISOR, denoted by ?d?

(vi) The number which tells us how many times the division has been carried out is called the QUOTIENT, denoted by ?Q?.

(vii) The number which is left after the division is called the REMAINDER, denoted by ?R?

(viii) The division should be continued till the remainder is either ?0? or less than the divisor (d).

(ix) A number divided by 1 gives the number itself as the quotient.

(x) A number divided by itself gives 1 as the quotient.

(xi) Zero divided by any number gives 0 as the quotient.

How much will you get if 12 pencils are equally divided between you and your friend?

Therefore, you get 6 pencils and your friend gets 6 pencils.

We can divide 15 cakes equally among 3 children by repeated subtraction.

Give 5 cakes to first child. 10 cakes are left.

Give 5 cakes to second child then 5 cakes are left.

Give 5 cakes to third child then, no cake is left.

Step 1: To divide 27 by 3 by short division method we write

Start with the hundreds.

The process of division is same in long divisions, as discussed in short division,

Unit place is 8 hence, 8 is the remainder and remaining digit of the dividend 6 is quotient,

In the above division, the last two digits from right of the dividend is 21. Hence, the remainder = 21.

The number, which is formed by the remaining digit is the quotient. Thus, quotient = 34.

In the above division the number which is formed by the last three digits of the dividend is 567. Hence, the remainder = 567 and quotient = 434.

Divide 87 by 7 and verify the division.

There are 56 articles. How many groups of articles can be made, if each group contains 8 articles?

If a bus can carry 45 children, then find the total number of buses required to carry 360 children.