In the previous class, we have learnt about numbers upto 99.

Let us now learn about numbers greater than 99.

Let us understand how to make numbers greater than 100 by taking following example:

This is one stamp.

This is a sheet of 100 stamp. On adding one more stamp to these 100 stamps it will become 101 stamps. This is how Raghu counts stamps more than one hundred. And we say this is one hundred one

PLACE VALUE OF A NUMBER

The value of a digit due to its position in a number is called its place value. 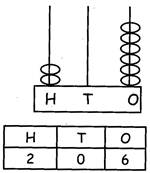 We write it as 206 and read it as two hundred six.

Let us take an example:

3 - This number has one digit

26 - This number has two digit

How can we read a number?

To read a 3-digit number, first read the hundreds place and then read the last two digit together.

How numbers are formed? Let us understand this with the help of some examples.

We write it as 126 and read it as two hundred six.

Now, lets us discuss about nearest number by taking some examples:

When we add the place value of all the digits in a number, then we get the expanded form of that number.

Let us take an example:

Let's make it clear with a few more examples.