A pattern shows the same thing again and again. It is an arrangement of objects; numbers or letters with some fixed rule.

Look at the patterns made with circles and tiles.

In the first pattern you can see one shaded and one unshaded circle getting repeated.

In the second pattern a square is divided diagonally and shaded half.

In increasing pattern numbers increase in a certain manner, for example.

In the above example numbers are increasing by two.

Geometric patterns were the great source of decoration in Islamic art which include calligraphy and vegetal patterns.

In decreasing pattern numbers decrease in a certain manner, for example.

In the above example numbers are decreasing by one.

In repeating pattern numbers are repeated in a certain manner, for example.

In the above example 1 and 2 are appearing one by one.

Patterns given above are based on repetition of shapes.

A shape can be turned up, down, left, right again and again. We can see turning shape patterns in art and fabrics.

The tiles which cover the floor of your house creates a pattern. The method of putting the tiles together without gaps is called tessellation.

We can see beautiful patterns on the skin of various animals, like Tiger, Zebra, Leopard etc.

Patterns which are made with the help of thumb and fingers are called thumb patterns.

Patterns which are created with the help of vegetables and fruits, are called vegetable and fruit patterns. 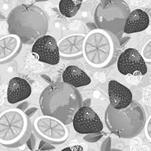