The devices which are used to input the data and the program in the computer are known as "Input Devices". For the text input, keyboard are used, microphone is used for audio or sound input. 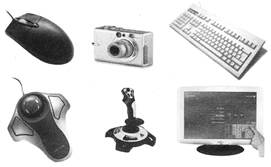 The keyboard is the most common input device. A 'keyboard' is a human interface device which is "-presented as a layout of buttons. It is a text based input device that allows the user to interact with the computer through a set of keys mounted on a board. 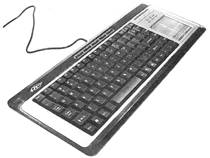 After the keyboard, the mouse is the most common type of input device. A mouse makes the process of navigating the screen much easier than trying to use just a keyboard. A mouse usually uses a ball, light or a laser to track movement. 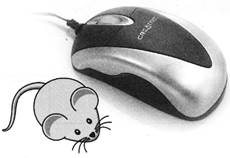 A joystick is an input device consisting of a large pointed stick and input buttons on it. We can use this for playing games on the computer. The joystick is a vertical stick which moves the graphic cursor in a direction the stick is moved. It typically has a button on top that is used to select the option pointed by the cursor.

An OMR is a device which detects alpha numeric characters printed or written on a paper.

The MICR is an input device or a technology used to verify the original paper documents, especially cheques.

A bar code Reader also called a price scanner of point-of-scale (POS) Scanner, is a hand held or stationary input device, used to read information contained in a bar code. 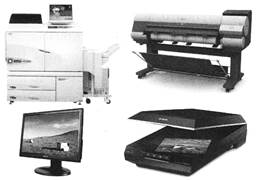 The Monitor is an output device that resembles with television screen and uses a CRT (Cathode Ray Tube) and LCD (Liquid Crystal Display) to display information. It is associated with a keyboard for manual input of characters and displays the information as it is keyed in. It also displays the program or application output. 1 hus, the monitor displays the results ot the computer s activities von the screen.

Monitor are classified into the following types:

Printers are output devices used to produce paper (commonly known as hardcopy) output of documents stored in an electronic form. Based on the technology used, they can be classified as Impact and Non-impact printers. 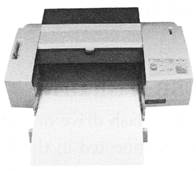 Types of impact printer are:

Speaker is one of the most common output device. It is a device that converts analog audio signals into the equivalent air vibrations in order to make audible sound. They receive audio input from the computer's sound card and produce audio output in the form of sound waves. 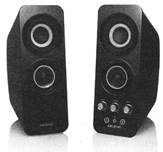 In computing input/output or I/O refers to the communication between an information processing system (such as a computer) and the outside world. With the help of a dual purpose device, we can enter data into the computer as well as we can output data from the computer. Good examples of an input/output device are a CD-ROM and DVD-ROM units and a hard disk drive. 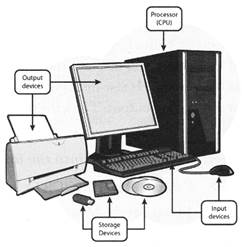 USE Flash drive or thumb drive or pen drive is used when it is connected in the USB slot of the CPU Cabinet. These type of devices is used for data storage. USB Flash drive is available with different capacities.

You must have seen or used CDs for watching movies, playing games and listening to music. CD-ROM is an acronym of "Compact Disc Read-Only Memory". It is a type of optical disk capable of storing large amounts of data ? up to 1GB, although the most common size is 700MB (Megabytes).

From the ancient period, human beings have been exploring and manipulating objects with their hands to sense the size, shape, texture and mass, etc. A Touch Sensitive Monitor is a pointing device that enables the user to interact with the computer by touching the screen. A touch screen is an electronic visual output that can detect the presence and location of a touch within the display area. 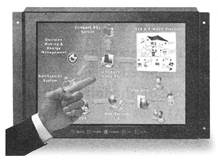