The Jacquard loom is a mechanical loom, invented by Joseph Marie Jacquard in 1801 that simplifies the process of manufacturing textiles with complex patterns. The loom is controlled by punched cards with punched holes, each row of which corresponds to one row of the design. Multiple rows of holes are punched on each card and the many cards that compose the design of the textile are strung together in order. Its entire operation was under the control of a program and its weaving process was automatic. The Jacquard loom was the first machine to use punched cards to control a sequence of operations. Although it did no computation based on them, it is considered an important step in the history of computing hardware. With the invention of punched cards, the era of storing and retrieving information started. 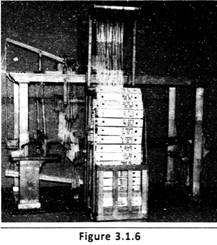 Jacquard Loom was a mechanical device which was a great help in textile manufacturing. Who invented this machine and in which year?

(B) Joseph Marie Jacquard invented Jacquard loom and in the year 1801.

Given below are the statements about Jacquard loom. Select the correct statements.

1. After the invention of punched cards, the era of storing and retrieving information started.

2. In Jacquard loom entire operation was under the control of a program.

3. The weaving process of Jacquard loom was automatic.

(C) All the given statements are correct.

(A) Not only statement 1 and 2 are correct but statement 3 is also correct. Therefore, option (A) is Incorrect.

(B) Not only statement 2 and 3 are correct but statement 1 is also correct. Therefore, option (B) is Incorrect.

(D) Not only statement 1 and 3 are correct but statement 2 is also correct. Therefore, option (D) is Incorrect.