Once we have some information / data, the next step is to get results from it. This can be done by arranging it. To make sense of the gathered information. It has to be organized and put into tables. We can make a tables by using a picture for each. Such an arrangement is called as. Pictograph.

Example of a pictograph

Number of people with their favorite fruit can be shown using chart as given below; 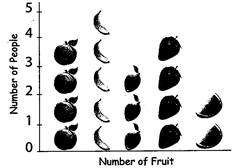 Number of students with their favorite ice cream can be shown using a bar chart as given below: 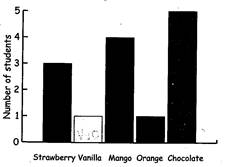 To represent numbers tally marks are used in the following way

When tally marks are made, the first four marks are made like this ||||. Then the fifth marks is made across the four marks\[\cancel{||||}\]. This makes it easy to court the marks.

Misconcept: A picture of an object shown in a pictograph represents one object only.

Concept: A picture of an object shown in a pictograph does not always represents on object only.