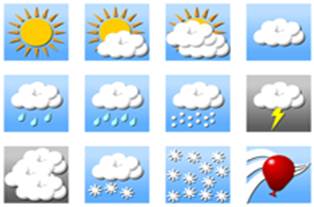 Weather of a place is the combined effect of Sun, wind and water. Sun plays an important role in changing weather. At noon sun's rays fall directly over our head and hence it is the hottest time of the day. Morning and evening are comparatively less hotter because rays fall at an angle. Land gets heated faster and also cools down faster than water.

During the day time land gets heated faster. Therefore, air near the land becomes hot, hot air goes high up and, cool air from the sea comes to take its place. This blowing of air from sea to land is called sea breeze and it flows during the day time. Sea breeze is cool and pleasant.

During the night, when there is no sun rays, land gets cooled faster. Sea water is comparatively hotter, as water gets warm or cool slower than land. Hot air above the sea rises up, and the vacant space is taken over by the cool air from the land. The blowing of air from land to see is called land breeze. Land breeze is comparatively dry. 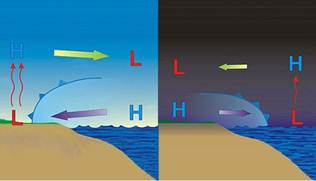 During winter we see fog all around, this is actually formed when dust particles get mixed up with moist air and they are suspended in the air. Our visibility becomes less in fog. Fog disappears when sun shines.

Certain weather patterns are seen in India due to revolution of the earth around the Sun. Weather varies with the season. Since the earth is tilted on its axis, different parts of the earth get closer to Sun at different time periods. Northern hemisphere lean towards the Sun in April - June hence it is summer in that part. Similarly, in December-January when northern hemisphere is away from the Sun, it is winter there. 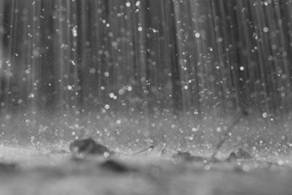 Clouds when loaded with water drops fall as rain.

The time duration in which northern hemisphere is closer to the Sun summer session comes in. During summer, weather is hot.

After summer comes the rainy session. Every year, there is a period of time in which wind blow fast and rain and storms is experienced by us. Heavy blow of wind is dangerous to men and their property.

This session comes between the end of the summer and the starting of winter. In this season the atmosphere becomes neither too hot nor too cold. Trees shed their leaves during the autumn.

During the spring, the atmosphere becomes neither too cold nor too hot. The weather is pleasant in this season. Lots of buds blossom into flowers during the spring.

Which one of the following is formed when dew freezes which is harmful for the crops?

When dew freezes, it is called frost, which damages the crop because of low temperature. Therefore, option (d) is correct and rest of the options is incorrect.

In which one of the following season, whether is very hot?

In summer season whether is very hot. Therefore, option (b) is correct and rest of the options is incorrect.

Nights are longer in winter and shorter in summer.

Days are longer in summer and shorter in winter.

On a summer day, the ground around the pond is hot, but water of the pond is comparatively cool.

Weather of a place is the combined effect of sun, air, water and clouds.

Land gets warmer and cools down fast than water.

Rate of evaporation is faster in an open area as compared to close area.

There is hardly any change in the weather near the cost.

Oxygen is essential for burning

keyboard_arrow_leftWater and its Different States