Birds are the member of the animal kingdom that can fly and have feathers all over the body. But there are certain animals like bat, which is a mammal but can fly. Similarly there are certain birds like ostrich, penguins, kiwi etc. those do not fly.

Feather all over the body;

Lay eggs instead of giving birth to young ones;

Beak in place of teeth;

Wings in place of fore legs which make birds a special organism;

Have a tail which is also made up of feathers;

They have claws to catch food and build nests;

Circulatory system similar to that of human;

Scales are found on the toes and ankle of some birds.

Look at the following picture of the body parts of a bird: 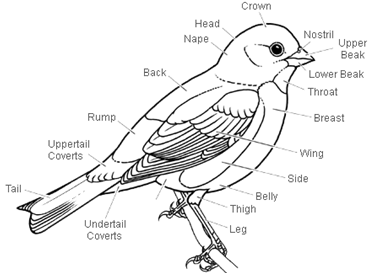 Birds, with the help of flight muscles, show mainly two movements. When the wings move upwards/ it is called up strokes. When it moves downwards it is called down strokes. Movement in birds are also different. Some birds like pigeon flies long distances, whereas peacock/ hen fly only short distances. Carnivores birds like eagle, vulture etc. fly at great heights. Some birds do not show movement in air. They are called flightless birds. E.g. ostrich, kiwi, penguin etc.

Look at the following picture of flightless birds:

Mostly birds have four toes in each foot and each toe has one claw. But ostrich has two toes. Claws help the bird to catch its prey or to hold and eat the food. It also help in swimming, climbing and perching etc.

Different types of birds have different types of claws which perform different function. Claws of sparrows, crows, pigeons etc. help them to sit on the branches by griping it. These birds are called perching birds. Scratching birds like hen and peacock dig the ground to take out tiny insects with the help of claws.

Woodpecker or hoopoe holds on to a tree. Therefore, in their claws pair of toes are in opposite direction. These birds are called climbing birds. Aquatic birds have webbed feet which help them in swimming .Toes are joined together by skin giving flat appearance. Wading birds like heron, crane etc. are also aquatic in nature. They don't swim rather they walk through it. These birds have long feet with toes spreaded and long neck to take out fish from the water. Carnivores birds like eagles, vultures tear flesh with their claws. They have specifically designed claws called as talons.

Birds don't have teeth like us instead they have beaks to catch and eat food. Shape and size of beaks are different in different birds, depending upon the kind of food they eat.

Woodpecker has chisel shaped strong beak to take out insects that lives under the bark of the trees. Humming bird has straw like long tubular beak to suck nectar. Parrots have hooked beaks to crack nuts and hard unripe fruits. Hawks, owls, eagles, vultures and kite, which are called birds of prey, have short thick, strong sharp and hooked beaks which help them to tear the flesh.

Ducks have flat and broad beak which has sharp tooth like structures on the edge of the beak called strainers. It allows water and mud out of the mouth and small insects or plants to remain their in the mouth. Puffin is a bird having a large bright red beautiful beak. Kingfisher has a long, thick, and pointed beak to catch fishes and tiny animals from water.

Look at the following picture of beaks of birds: 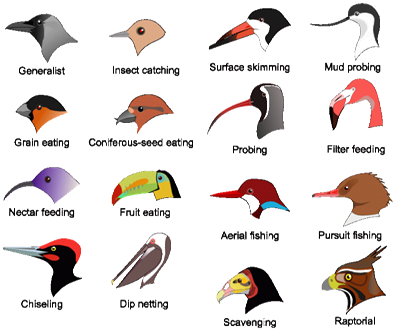 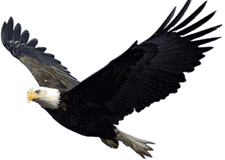 Muscles of birds are very strong as they have to fly in the air and for this they move their wings up and down. Wings are attached to the breast bone with muscles called flight muscles. These muscles work for hours without talking rest. Birds have two large flight muscles.

Presentation of feathers on the body and wings insulate the birds from water and cold. Feathers covers almost every part of a bird's body.

The following are the types of feathers:

Look at the following picture of feathers of bird:

Flight feathers are found on the wings. They help in propelling birds through the air. It also helps to sustain the bird in the air. Feathers on wings help in flight, whereas tail feathers are used for starring.

Wings of a bird can be called its fore limbs. All birds have wings irrespective of whether they fly or not. Flight less birds like ostrich, penguin, kiwi etc. also have wings.

Most birds lay eggs in nests to protect themselves and their babies from enemies and adverse climatic conditions. Birds build nest everywhere on trees, riverside, inside trees, bushes, window or in holes in the ground.

Depending upon their requirement and availability of resources, different birds build different types of nest. For example, woodpecker makes a hole in the tree trunk and lives there. Hoopoe make nest in a hole or opening in a bank, wall, tree etc. In fact birds build an attractive and beautiful nest with the help of leaves, grasses and twigs. A very fine weaving is seen in their nest. The completed nest has a long entrance.

There are birds, called tailor birds, which sew a nest from leaves. It has needle like beak to do the above function. Their nests are also very attractive. Penguins make nest, with some stones and pebbles because they could not find leaves, straw, grass, twigs etc. in very cold places.

Presence of feather on the body of a bird:

(a) Insulate the body from water

(b) Insulate the body from cold

(c) Insulate the body from sound

(d) Insulate the body from light

Presence of feather on the body of a bird Insulate the body from water and cold. Therefore, option (e) is correct and rest of the options is incorrect.

Which one of the following birds makes nest with the stones and pebbles?

Penguin lives in cold places, where it cannot find grasses, leaves, straw and twigs etc. to make nest. Hence it makes nest with stones and pebbles. Therefore, option (d) is correct and rest of the options is incorrect.