Our universe is a large and unimaginable expanse of gases, dust, stars, planets, etc. In this chapter, we will learn about some members of our universe.

Stars are the huge balls of fire that twinkle in the night. They are very far away from us. A telescope is used to see the stars, the moon and the planets clearly.

Sun is a star. It is a huge ball of fire that gives us light and heat. Sun is also the head of a big family called solar system. Solar system consists of sun and eight planets along with their satellites.

There are eight planets in the solar system. They are Mercury, Venus, Earth, Mars, Jupiter, Saturn, Uranus and Neptune. There is also a dwarf planet in the solar system known as Pluto. A planet revolves around the sun in a fixed path.

Moon is the natural satellite of earth. It moves around the earth. It has mountains and sand. There are huge holes on the moon. These holes are called craters. Moon has no air. It does not have its own light also. Shapes of the moon are different on every night and these are called the phases of moon.

Our earth is the only planet known to have life; that is plants and animals on it. It is the third planet in the solar system. It was formed many years ago. It is believed that the earth was very hot when it was newly formed. There were no plants or animals on it. Later, there were rains and thunderstorms. This cooled down the earth from outside. Slowly living forms started appearing on the earth.

Shape of the Earth

The earth appears flat to us because we see only a tiny part of it. But people who have travelled into space have seen the round earth from there. People who travel into space are called astronauts. Astronauts who went to the moon also confirmed that the earth looks round from there.

Movements of the Earth

The earth moves around the sun. We cannot feel the movement because the earth is moving very smoothly and slowly. Our earth shows two kinds of movements:

The spinning movement of the earth about its axis is called rotation. 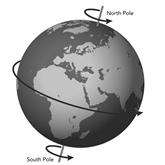 The rotation of the earth causes day and night. The earth takes 24 hours to rotate once on its axis.

In the same way, when the earth rotates on its axis, one half of the earth faces the sun.

India and America are on two different halves of the earth. This is the reason why it is night time in America when it is day time here in India. 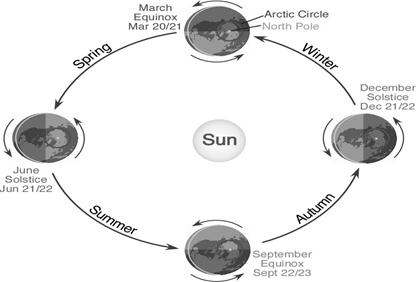