Living things can move, eat food and produce young ones. The process of producing young ones is called reproduction. Different animals reproduce by different methods. Some animals lay eggs and some give birth to young ones.

Animals like birds, reptiles, insects and amphibians lay eggs. An egg is an organic vessel in which an embryo begins to develop.

Birds lay eggs. Eggs have a hard, protective shell. Which contains a yellow yolk surrounded by white albumen. The yolk provides food to the chick growing inside it. The growing chick is called embryo. The parent bird sits on the egg to keep it warm. The chick breaks the shell and comes out when it has grown. This is called hatching.

Insects reproduce by laying eggs. Insects like butterfly and housefly have four stages in their life cycle i.e. egg, larva, pupa and adult. The egg is hatched into a larva. The young one looks different from the adult. The larva of a butterfly is known as caterpillar and that of a housefly is called a maggot. The larva first grows rapidly by eating the leaves. Then after sometime, it stops eating and forms a covering around itself called as cocoon. This is called the pupa. The larva changes into an adult inside the pupa and comes out of it after sometime.

Amphibians reproduce by laying eggs in water. The young frog which comes out of the egg is known as tadpole.

Fishes also reproduce by laying thousands of eggs in water. But only few eggs grow into baby fishes.

Reptiles lay eggs in the sand or rotting vegetation. They do not sit on the eggs to keep them warm. The sea makes them warm and the egg is hatched.

Animals Gluing Birth to Young Ones

Mammals are the animals which give birth to young ones and produce milk to feed them. They do not lay eggs. Dogs, monkeys, cats and human beings comes under the category of mammals. Bats are flying mammals. Whales and dolphins are also mammals living in water.

The home or natural environment of a living thing is known as habitat. All living beings changes themselves to survive in the natural world, for example, birds and insects can fly. This is called adaptation.

Classification of Animals on the Basis of Their Habitat

Animals are classified on the basis of the place where they live.

Frogs and toads are some of the animals which can live both in water and on land. They are called as amphibians. 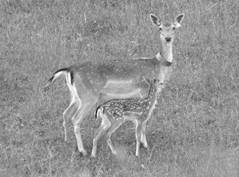 Some animals like bear and squirrel stores a lot of food in the form of fats under their skin during summers. In winters, when food is not there, they go on a sleep for a long time. This sleep is called hibernation.