A smallest particle of matter, which can exist in a free state is called a molecule. Structure of molecules of some elements has been given below.

Molecules of any given substance are all similar. A molecule is defined as a group of at least two atoms in a definite arrangement. Molecules are formed by the combination of two or more atoms. The Properties of a substance are the properties of its molecule. Molecules can be subdivided to individual atoms. The atoms are bounded together in a molecule. Molecules also are not visible to the naked eye. It can be seen through highly magnifying microscopes and other scientific devices. 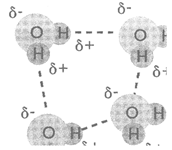 Group of atoms in a definite arrangement to form molecule

Consider the statements given below and select the right answer.

Statement A: A molecule is defined as a group of at least two atoms.

Statement B: Molecules are visible to the naked eye.

(a) Statement: A is true

(b) Statement: B is true

Molecules of water is made of which one of the following kind of atoms?

(a) Helium and Oxygen