A local area network is a network that covers a relatively small space and provides services to a small number of people, such as office, school, small group of building, etc. Typically, connected computers/devices share the resources of a single processor or server within a small geographic area. Usually, the server has application and data storage that are shared by multiple computer users. A local area network may serve as few as two or three users or as many as thousands of users.

In LAN, two method of networking may be used:

These can be classified into two types:

2.   Print server The server performs many tasks, one such task is file server, while other servers can not only perform in the capacity of file servers and print servers but also can conduct calculations and use them to provide information to clients (Web/lntranet Server). Computers may be connected in many different ways, including Ethernet cables. Wireless networks or other types of wires such as power lines or phone lines. (See Figure 5.7.2) 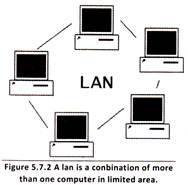 A wide area network is a computer network that covers broad area i.e. large geographical area. In this network wide variety of resources are deployed across a large domestic area or internationally. An example of this is a multinational business that uses a WAN to interconnect their offices in different countries. The largest and best example of a WAN is the Internet, which is a network composed of many smaller networks. The Internet is considered the largest network in the world. The PSTN (Public Switched Telephone Network) also is an extremely large network that is converging to use Internet technologies, although not necessarily through the public Internet. A Wide Area Network involves communication through the use of a wide range of different technologies. These technologies include Point-to-point WANs such as Point-to-Point Protocol (PPP) and High-Level Data Link Control (HDLC), Frame Relay, ATM (Asynchronous Transfer Mode) etc. The difference between the WAN technologies is based on the switching capabilities they perform and the speed at which sending and receiving bits of information (data) occur. A WAN often contains multiple local area networks and metropolitan area network. (See Figure 5.7.2) 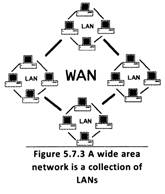 Identify the type of network in the given picture. 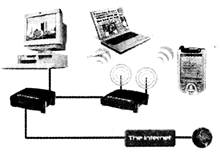 (A) WAN: This is the figure of a WAN (Wide Area Network).

(B) MAN: This option is incorrect

(C) SAN: This option is incorrect

(D) LAN: This option is incorrect

(E) None of these: This is an invalid option

Which one of the following is considered as the largest network in the world?

(B) Internet: Internet is often referred to as 'network of networks' and considered to be the largest network in the world.

(A) PSTN: This option is incorrect

(C) Ethernet: This option is incorrect

(E) None of these: This is an invalid option