Be aware of instances where a pronoun might be ambiguous. For example, in the sentence ?When Rose, John and Derek played, Rose gave the ball to him, ?him? could refer either to John or Derek. In these cases, it?s better to use the regular noun to eliminate confusion.

This lesson will help you to:-

learn about different kinds of pronouns.

know the correct usage of pronouns.

Pronouns are parts of speech that replace other words. Usually nouns, in a sentence. They include words like 'I', 'we', 'it', 'myself' and 'you'. Using pronouns is beneficial because it makes a sentence sound less repetitive, and the pronouns may be shorter than the word to which they refer. 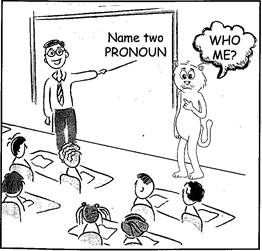 1. Personal Pronoun: Example:- I ate a chocolate. You ate chocolate. Mrs Roy is shouting. She is angry. Mr Khan is running. He is in a hurry. We were frightened to hear the thunder. They are laughing, at the clown. Here ?I, WE, YOU, HE, SHE, IT, THEY,? are called Personal Pronouns because they stand for the three persons; (i) the person speaking ---?I?, ?we?, denote the first person, (ii) the person spoken to--- ?you? denotes the second person and (iii) the person spoken of--- ?he, she, it, they? denote the third person.

2. Relative Pronoun: I met Suman yesterday who had returned from London. He found the pen, which he thought he had lost. Here is the book that you had lent me. Here the pronouns ?who?, ?which? and ?that? are relating or connecting to the nouns ?Suman?, ?pen? and ?book? respectively. These are called Relative Pronoun.

4. Reflexive Pronoun: Example:- I tried to do it myself. You should try to do it yourself. We were very ashamed of ourselves. The students were asked to behave themselves. The action here is turning or reflecting back( reflects) to the person who is performing the action. It is a Reflexive Pronoun.

5. Emphatic Pronoun: Example:- I myself saw her singing at her work. You yourself can answer best. They themselves took part in the show. The city itself fell. In all these cases, the reflexive pronouns are use for the sake of emphasis and are, therefore, called Emphatic Pronouns. These are also called Emphasizing Pronouns.

6. Distributive Pronoun: Example:- Each of us will get a share. Either of these two girls may win the prize. Neither of the statements is true. Here ?each?, ?either?, ?neither? are called Distributive Pronouns because they show that the persons or things are taken singly or in separate groups. They are always singular and are, therefore, followed by the verb in the singular.

8. Indefinite Pronoun: "Indefinite" means "not exact. not limited." Example:? One cannot say when war will break out. None but the brave deserve the fair. Somebody has stolen my money. Nobody was there to save the drowning child. Anybody could have done it. Everyone believed her. All the pronouns in bolds in the above sentences are used indefinitely. They do not refer to any person or thing in particular, therefore they are called Indefinite Pronouns.

A Poem on Grammar

A NOUN is the name of any thing: As school or garden, hoop, or swing

Are ARTICLES ? a, an and the. In place of nouns the

PRONOUNS stand: John?s head, his face, my arm, your hand.

VERBS tell of something being done: As read, write, spell, sing, jump, or run. How things are done the

ADVERBS tell: As slowly, quickly, ill, or well. They also tell us where and when: As here, and there, and now, and then

A PREPOSITION stands before

A NOUN: as in or through a door.