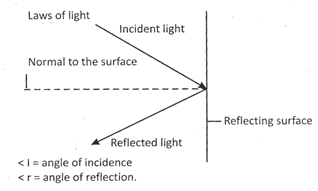 According to the law of reflection:

Angle of incidence = Angle of reflection.

Incident ray, reflected ray and normal ray all lie on the same plane.

Incident ray is the light that strikes the mirror. Angle formed between incident ray and normal to the surface is called angle of incidence.

Reflected ray is the ray of light that gets reflected back after striking the surface.

The angle formed between reflected ray and normal to the surface is called angle of reflection.

= Angle between the mirrors.

Then, Number of images formed

And, Number of images formed

In old days people used fires, oils and candle for lightening. But today due to rapid development in the field of science, we use electricity or gas.

Some living organisms like fireflies, glow worms, also some plants and moulds glow with light. But heat is not produced along with light and hence they give the sensation of cold light.

Glow worm glows with the chemical energy inside its body

Nature of image formed by a plane mirror 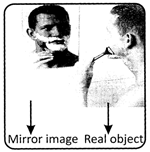 The size of the object and its image is same.

The image is formed behind the mirror at the same distance as the object is placed in front of it.

When light rays enters from one medium to another medium, bending of ray of light takes place either towards normal, or away from the normal due to difference in the speed of light in different medium.

Look at the following picture of refraction of light in glass: 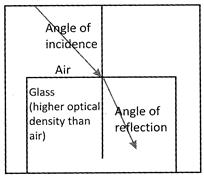 Look at the following picture of refraction of light in water:

Stars appear twinkling. Sun appears bigger during sun set or sun rise and visibility of sun rays before sun rise and after sun set are all due to continuous refraction of light rays in atmosphere.