Photons are tiny little particles of light, far too small (to be seen individually. All light is made up of photons they are the fundamental particles of fight. The photon is massless and has no electric charge. In empty space the photon travels at the speed of light. The concept of the photon was developed by Albert Einstein.

One of the characteristics of light is that it behaves like a wave. As a result, light can be defined by its wavelength and frequency. The frequency is how fast the wave vibrates or goes up and down. The wavelength is the distance between two peaks of the wave. Frequency and wavelength are inversely related, meaning that a low frequency wave has a long wavelength and vice versa.

Light helps us to survive

Without sunlight our world would be a dead dark place. Sunlight does more than just help us see. Sunlight keeps the earth warm, so it's not just a frozen ball in outer space. It also is a major component in photosynthesis which is how most of the plant life on earth grows and gets nutrients. Sunlight is a source of energy as well as a source of vitamin D for humans.

The speed of light

Light moves at the fastest known speed in the universe. Nothing moves faster than (or even close to) the speed of light. Light travels in a straight path called a ray. Speed of light in air is 2.99 X 108 meter per second.

Normally, light travels in a straight path called a ray, however, when passing through transparent materials, like water or glass, light bends or turns. This is because different materials or mediums have different qualities.

In each type of medium, whether it is air or water or glass, the wavelength of the light changes, but not the frequency. As a result, the direction and speed of the travelling light wave will change and the light will appear to bend or change directions.

In the visible spectrum of light, the colour of the light depends on the frequency. The visible spectrum is always the same for a rainbow or the separated light from a prism. The order of colours is red, orange, yellow, green, blue, indigo, and violet. A fun way to remember this is by using the first letter in each colour from reverse order to spell out the name VIBGYOR.

Some of the non-visible types of waves are radio waves, microwaves, infrared rays, and X-rays. 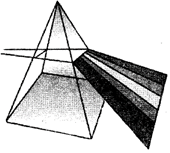 Most of the light on earth comes to us from the sun. The sun shoots out billions of photons every second in all directions, and the ones that happen to be pointed towards the earth come here. When these photons reach the earth, they first run into earth's atmosphere. Some of the photons get absorbed by the atmosphere itself, especially the ultraviolet ones whose wavelength is shorter. Rest of the photons reach the earth surface.

Sound is a vibration, or wave, that travels through matter (solid, liquid, or gas) and can be heard.

Misconcept: Light can only be reflected from shiny faces such as a mirror.

Concept: All objects absorb and reflect light to different degrees. Our ability to see objects depends on the reflection of light!

Misconcept: The earth gets heat from the light!

Concept: The sun is actually too for from the earth to heat it directly. Instead, the light from the sun is reflected or absorbed by objects on earth. Absorbed light usually increases the object to heat up.

Misconcept:  The more mass in a pendulum bob, the faster it swings.

Concept: The lighter the pendulum, the faster it swings or oscillates.

How does sound move or propagate?

The vibration is started by some mechanical movement, such as someone plucking a guitar string or knocking on a door. This causes a vibration on the molecules next to the mechanical event (i.e. where your hand hit the door when knocking). When these molecules vibrate, they in turn cause the molecules around them to vibrate. The vibration will spread from molecule to molecule causing the sound to travel.

Sound must travel through matter because it needs the vibration of molecules to propagate. Because outer space is a vacuum with no matter, it's very quiet. The matter that transports the sound is called the medium.

The speed of sound is how fast the wave or vibrations pass through the medium or matter. The type of matter has a large impact on the speed at which the sound will travel. For example, sound travels faster in water than in air. Sound travels even faster in steel.

The volume of sound is the measure of loudness.

To quantify volume we use decibels. The more the decibels, the louder the sound is. A soft sound, like a whisper will measure around 15-20 decibels. A loud sound like a jet engine is more like 150 decibels.

Loud sound can actually damage your ears and cause loss of hearing. Even sounds as loud as 85 decibels can ruin your ears if you listen to them over a long period of time.

Sound is very important for communication. The process of making precise sounds for speech is very complex and involves many parts of the body working together. Sounds are made by our vocal cords vibrating in our throat. This way we can adjust our volume and our pitch.  We also use our lungs to force air past our vocal cords and start them vibrating. We use our mouth and tongue as well to help form specific sounds.