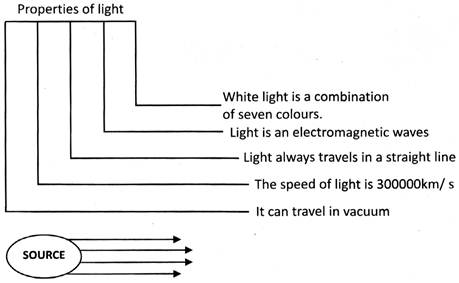 During thunderstorm and lightening, lightening is seen before we hear thunder, because light reaches the surface first than sound. Speed of light is 3x108 m/s and the speed of sound is 340 m/s. 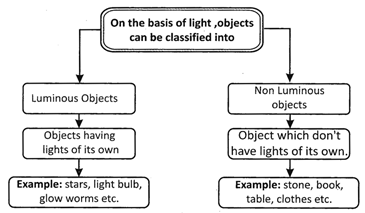 Look at the following pictures of luminous objects:

Opaque: Substances which do not allow light rays to pass through it are called opaque, e.g. stone, wood, book etc.

Bouncing off light rays into the same medium after striking the surface is known as reflection of light. 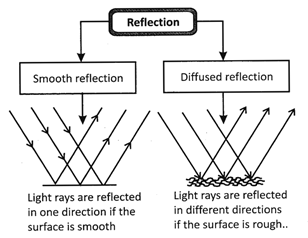 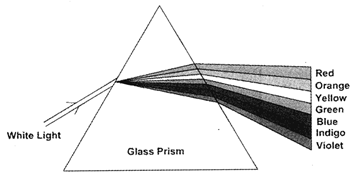 A beam of white light is dispersed into seven colours when passed through a prism as shown above. The order of colours dispersed by light is, violet, indigo, blue, green, yellow, orange, red.

Colour before violet is ultraviolet and colour obtained after red is infrared.

Both the colours, ultraviolet and infrared, are invisible to the naked eyes.

Hence, the phenomena of breaking white light into seven visible colors when passed through prism are called dispersion.

The band of seven colours obtained in the above phenomena is called spectrum.

Rainbow formation is based on the phenomenon of dispersion of light.

Rainbow in the sky after rain

Rainbow formation is an optical phenomenon which occurs when a ray of light is splited into seven colours from violet to red when passed through a drop of water in the sky just after rain. Rainbow is a spectrum of seven colours in the given order.