Shadow is formed when opaque objects come in between light source and the screen (Which can be ground, wall etc.).

Light always casts shadows of the opaque objects placed in its path. The size and direction of the shadow depend on the direction and distance of the light coming from the source.

Shadows are always black and represent the outline of the object.

Conditions necessary for the formation of shadow:

Screen on which shadow is formed.

Organ in the body which receives light sensation are eyes.

Look at the following picture of internal structure of eye: 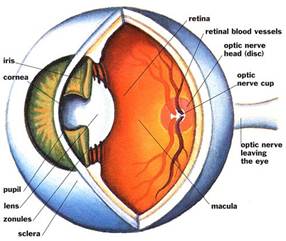 Look at the following picture of parts of eyes and their functions: 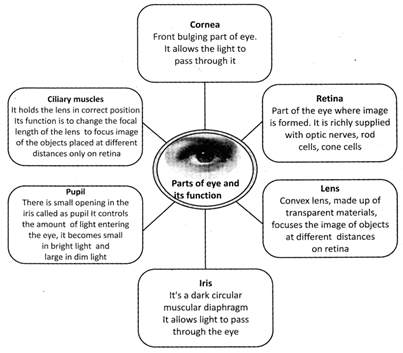 Shruti is surprised to see the light phenomena in National Science Centre where the different types of images of a person are seen in a mirror. Which branch of science she should study to understand the reason behind this?

Number of images formed would depend on the angle between the mirrors, infinite images are formed when two mirrors are placed parallel to each other. Therefore, option (B) is correct and rest of the options is incorrect.

Dimpy and Ashoo are talking about the given natural phenomena. Who is correct Dimpy or Ashoo?

(c) Both are correct

(b) Both are incorrect

Speed of light is faster than the speed of sound, hence lightening is seen first than thunderstorm. Therefore, option (B) is correct and

rest of the options is incorrect.