Our Environment and Natural Calamities

Air and water form an essential part of our surroundings. Everything surrounds and affects an organism is known as its environment.

All living beings breathe in air. Air is needed for many purposes like lighting a fire, flying kites and inflating tyres.

Air is a mixture of gases. More than three fourth of air contains nitrogen, slightly more than one fifth of air is oxygen and rest of the air contains gases like argon, carbon dioxide, ozone, helium, neon, etc. Air also contains dust, smoke and water vapour.

Components of air are as follows:

It is the most important gas present in air. It forms one fifth of the air. All living things breathe in oxygen. It is also required for burning a fire.

This gas is very much important for plants. Plants use carbon dioxide for preparing their food by the process of photosynthesis

Argon, helium, ozone, neon, etc. are some other gases which are present in very small quantity in air. Helium is filled in gas balloons and neon is used to make glow signs.

Followings are the properties of air:

Almost three fourth of earth's surface is covered with water. Therefore, earth is also called 'The blue planet'. Water is essential for all living beings. About three-fourth of our body is made up of water. Loss of water from human body is called dehydration. Water is also used for cooking, washing, in agriculture, in industries and for generation electricity.

Environmental pollution occurs when any undesirable change takes place in the physical, chemical and biological characteristics of air, land and water. Pollution can occur due to natural or man made reasons.

Pollutants are the agents that cause pollution. Pollutants can be of two types. These are.

(i) Biodegradable pollutants: These pollutants can be broken down into simpler compounds by the action of microbes. For example, kitchen waste and agricultural waste.

(ii) Non biodegradable pollutants: These pollutants cannot be broken down into simpler compounds by the action of microbes. For example, plastic and pesticides.

Water pollution is caused when pollutants from factories, power plants and oil wells are discharged directly into the water bodies.

Dumping and burying of solid poisonous waste from factories is the main cause of land pollution. In addition to this garbage, plastic and other wastes also pollute soil.

Vehicles, loudspeakers, etc., are the sources of noise pollution. Exposure to loud noise over a long period of time even cause deafness.

(i) Avoid burning wastes especially wastes such as plastic. (ii) Tall chimneys should be used to throw the smoke out of the factories.

(iii) Control the burning of fuels such as petrol and diesel. Public transport can be used for travelling to reduce the number of vehicles.

Natural calamities are some disasters caused by nature which might affect our lives. Some of the natural disasters are earth quakes, volcano, tidal waves and drought.

An earthquake is a sudden shaking of the ground caused by the movements or vibrations deep inside the earth.

The earth's upper layer, the crust, is made of large and small plates called tectonic plates.

The layers of the earth under the tectonic plates are hot and in a molten state because the core below is extremely hot. These layers under the plates are constantly moving

Such movements cause the plates to slide smoothly against each other. These movements can sometimes gives rise to earthquakes.

When the ground shakes, houses, buildings and bridges shake. When it lasts for sometime, roads crack, structures shatter and communication systems collapse. Also there is loss of life and property.

People who study earthquakes are called seismologists. Earthquake can be detected with an instrument called a seismograph.

'Tsunami' is a Japanese word meaning harbour wave. Tsunamis are caused by earthquakes taking place under the sea, volcanic eruptions, etc. The waves of tsunami can be as high as 20 to 30 meters. They strike suddenly and cause great damage.

A volcano is an opening in the earth's surface which allows hot, molten rock, lava and gases to escape from below the surface. These burst out of the crust at the top or holes around the sides of the volcano through weak points. Some volcanoes are formed under the sea. When the lava cools down, the area formed looks like a new island.

The barren island is the only active volcano in the Indian subcontinent. It is located in the Andaman and Nicobar Islands. 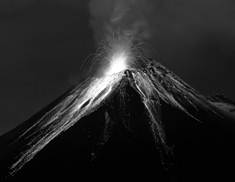 Drought are caused by very poor rainfall. This causes acute shortage of water for agriculture and domestic use. Land and water bodies dry up because of severe heat. Because of scarcity of water, animals and people suffer from food and drinking water.