The crust of the earth is made up of soil and rock. Rocks are made up of minerals. A rock can have one or many minerals.

Sand is actually very tiny pieces of broken rocks. Depending on their formation, rocks are of three types: igneous, sedimentary and metamorphic.

The word igneous means made from fire or heat. Deep inside the earth in some areas it is so hot that even hard things like rocks melt.

Molten rock is called magma. Sometimes the heavy rocks around the magma push it upwards towards the earth's crust. The magma comes out through a weak point on the surface of the earth. The place from where magma escapes to the surface of the earth is called a volcano. Hot gases, ash, rocks and magma push their way out through the volcano. The hot magma keeps flowing out of the top of the volcano in the form of a liquid called lava. The lava begins to cool and slowly hardens to form solid rock. This solid rock is called igneous rock. Examples of igneous rocks are granite, pumice, basalt and obsidian.

There are different types of igneous rocks.

When the magma cools slowly under the ground, it forms granites, a type of igneous rock. Some beautiful temples in Tamil Nadu are made of granite. Grey or black granite is used for making strong buildings. Highly polished granite is used for flooring.

Pumice is a light grey or cream coloured rock. It has many tiny holes which are formed by gases trapped inside it at the time of formation. It is formed by very quick cooling of the lava Pumice is very light. Dentists use powdered pumice for polishing teeth. It is also used to polish furniture, to clean floors, and as a body scrubber.

Basalt is formed when the lava cools quickly and hardens above the ground. It is a fine-grained rock made up of tiny crystals.

Obsidian looks almost like black glass. It is used to make tools.

Flowing rivers carry soil, sand, pieces of rock and clay into the sea. All these thing sink to the bottom of the sea and settle down in layers called sediment. Heavy sediment like rocks, pebbles and gravel make up the bottom layer. The lightest sediment is mud which forms the topmost layer. Sand settles between the two layers.

As time passes, more and more layers are formed. The weight of the upper layers presses down on the lower ones. Over hundreds or thousands of years the lower layers slowly harden and form sedimentary rocks. It is possible to see the different layers of sediment in many of these rocks. Examples of sedimentary rocks are conglomerate, sandstone, shale, limestone and chalk.

When the lowest layers of sediment consisting of pebbles, sand and gravel harden, they form conglomerate. It is mostly orange or grey in colour.

When the layers of sand harden, they form sandstone. It may be red, brown, pink or yellow in colour. This depends on the colour of the mineral it is made from. Sandstone is often used to make buildings. The Red Fort in Delhi is built with red sandstone.

When the layers of clay and tiny mud particles harden, they form a soft rock called shale. When a piece of shale is immersed in water, it smells like wet mud. Shale is used to make tiles and roofs.

Certain tiny animals with hard shells made up of calcium carbonate live in the sea. When these animals die, their shells settle on the seabed and form a layer. Over the years, the layers of shells form limestone.

Chalk used for writing on the blackboard, is a type of limestone. Limestone is widely used as a building stone. It is used for making cement and glass too.

Fossils are not rocks but they are remains of ancient plants and animals found in sedimentary rocks. Shells, bones, footprints, leaf prints, etc. form fossils.

Sometimes sedimentary or igneous rocks change because of the weight of the layers above them or when they become very hot. The new rocks thus formed are called metamorphic rocks. Examples of metamorphic rocks are marble, slate, quartzite and gneiss.

Limestone changes into marble. The beautiful Taj Mahal in Agra is made up of marble.

Marble can be cut and polished and made really smooth.

Slate is a hard and smooth metamorphic rock. Slate is used to make roofs. It is also used to make writing slates for children and blackboards for teachers.

Sandstone, a kind of sedimentary rock, changes to form quartzite. Quartzite is used to make statues.

Granite changes to form gneiss. It is made up of light and dark bands.

Sod is the uppermost layer of the earth in which plants grow. It is the basis of all life.

Rocks break up into very tiny pieces due to the action of heat, rain, wind and water.

These tiny pieces along with humus, air and water form soil. This process takes millions of years. The land around us keeps changing due to the action of water, wind and man.

Soil is important because plants grow in it. Soil and plants help each other. Soil gives plants support as their roots grow and fix themselves firmly in the soil. It has nutrients

Which plants need for their growth. Plants in turn hold the soil together with their roots. Because of this, soil does not get blown away by the wind or washed away by running water.

We know that all green plants make their food through the process of photosynthesis. This good is stored inside the plants in the form of starch. Animals and human beings feed on this stored food directly or indirectly by either eating plants or eating animals that feed on these plants. Thus, soil is really the basis of all life on earth. Soil is also home to small animals like ants, moles, earthworms and rabbits.

You have already read that wind, rain, running water, heat and cold help in making soil The process of wearing away of soil slowly over a period of time is called soil erosion.

Plants have most of their roots in the top soil which is a thin layer. Soil erosion makes the land unfit for growing plants. In nature, soil keeps eroding and new soil keeps forming. So there is a good balance between soil erosion and soil formation. This balance sometimes gets disturbed by natural or human forces.

There are various agents of soil erosion. These are as follows:

In desert and semi-desert regions, dry soil or dust is blown away by the wind. A strong wind carries away a good part of the top soil. This affects farmers because manure is blown away. Quite often the roots of plants lose their soil cover due to the wind and die.

Running water washes the soil off the hill slopes. It is for this reason that the slopes the Chambal Valley in Madhya Pradesh are unfit for farming.

A river coming down the hills carries a lot of mud with it. On reaching the plains the flow of the water slows down. It leaves part of the soil on its way. Over the years, it soil keeps accumulating and makes the river change its course. The yellow river of China or Hwang Ho was known as the 'Sorrow of China', because it often changed its course.

This resulted in loss of life and property. In Bihar, river Kosi is known to change course frequently.

We cut down forests to meet our needs for housing, food and wood. Trees are cut down at a very fast rate and enough trees are not planted to replace them. This is called deforestation. The roots of trees and plants hold the soil together. When trees are cut down the soil becomes loose and gets blown away by the wind or washed away bv rain or running water. Deforestation also cause floods when rivers swell and the water fills up places where people live. Floods cause harm to life and property.

Overgrazing by cattle in the same patch of land year after year also causes soil erosion.

Ploughing of the hill slopes loosens the soil. It is another factor that leads to erosion.

It takes millions of years for soil to form. But it does not take that long for it to get eroded. We cannot stop erosion in nature but we can take steps to slow down the process.

We can prevent soil erosion by planting new trees. This is known as afforestation. This is very effective in the hilly areas for the conservation of soil.

Cutting hill slopes into steps or terraces can reduce soil erosion. The steps slow down the flow of water. As the water flows down, some soil from one step is left on the next step, reducing the amount of the loss of soil.

During monsoon many rivers overflow and wash away the soil on their banks. To prevent this tall mud walls called bunds are built on the sides of the rivers. The bunds hold the water between the river banks and prevent soil erosion. 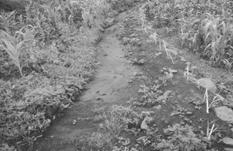 Minerals are chemical substances that occur in nature. They are formed by natural processes that occur within the earth. They may be simple or complex. Rocks are formed of minerals. Mica, magnesium, etc are common minerals which are non-metallic. There are some metallic minerals also like gold, silver and iron.