We require energy to do work. We get lots of nutrients from plants and animals, which are the source of energy. These nutrients in our body is digested and give us energy. A small animal like ass cannot carry load equal to the load carried by an elephant. Hence, the energy is the capacity to do work. Every movement in our universe is carried out by the consumption of energy.

If we throw an iron ball slowly on a soft piece of land, the ball will float on the surface. If thrown fast then the ball will dig the land and will enter into the lower surface. Hence, the kinetic energy of an object is dependent on the speed of the object.

Look at the following picture of examples of kinetic energy: 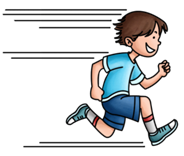 Look at the following picture, the example of potential energy::

In the above picture a ball of mass m is placed at the height of h. The ball possesses potential energy and energy possesses by the ball is calculated by the formula: product of mass of the ball, gravitational pull or gravitational constant (9.8) and height from the surface of the earth. Hence the potential energy possessed by the ball = m x g x h.

Principle of Conservation of Energy

The energy possesses by a body is always remains constant and no energy is externally supplied and taken away from the body. But the energy stored in the body is transformed from one form of energy to another form. This principle of energy is known as the conservation of energy.

Wind and water are also the source of energy, which are used for the generation of electricity.

Depending upon the availability of different sources of energy, it can be classified into two types, renewable and non renewable source of energy.