A force is a push or pull. It can help us to do the work. It brings the change or tries to bring the change in the state of motion. Force may be of various types, e.g. mechanical, gravitation, magnetic, frictional, electric and buoyant force.

Whenever an applied force is capable to move an   object on which the force is applied, the work is done. No change in position means no work. Work is measured in joule, which means the object is displaced by one metre with one Newton Force.

It is a tool that makes the work easy. For example

A lever is a simple machine. It is a rigid rod that turns around a fixed point called fulcrum. It consists of fulcrum (f), load (w) and effort.

Levers classified into three kinds according to the position of fulcrum, load and effort. 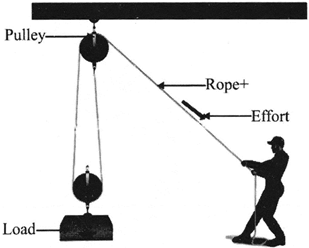