Verb is a word or group of words that expresses action. feeling or existence. 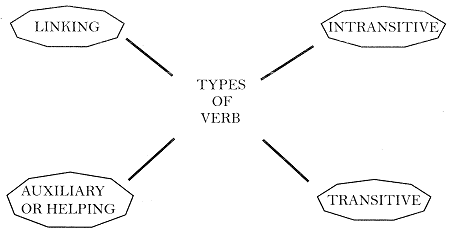 The verb that does not need any object to make a sentence meaningful is called intransitive verb.

The verb that needs an object to make a meaningful sentence is called transitive verb.

There are two objects with transitive verbs:

A person and a thing

The person is an indirect and the thing is a direct object.

He told us about an incident.

I bought a bouquet for my mother.

(a)        Transitive Verb with Object and Complement

There is a complement with object in the sentence.

He offered her (object) a book (complement).

The verb that needs a complement to make a meaningful sentence is called linking verb.

The soup is hot.

They chose Mr. Khanna, their leader.

Auxiliary verbs are the helping verbs which help the main verb in tense, mood or voice.

I had opened the door

All the verbs have three forms.