Look at the following table:

Speed is defined as the distance travelled in per unit time. If a car travels at a distance of 40 km in one hour then the speed of the car =

Look at the following picture of speedometer and odometre: 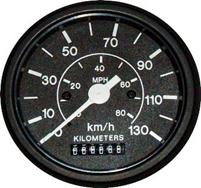 A sensor on the wheel of the vehicle senses the rotation of the wheel and it sends the sensed signal to the speedometer. Speedometer receives the signal and its digital or analog panel show the travelled distance as per the time divisions of the speedometer.

Look at the following time distance graph for uniform speed: 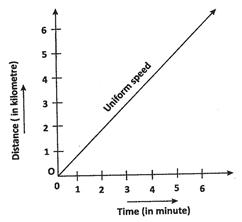 Look at the following time distance graph for non-uniform speed: 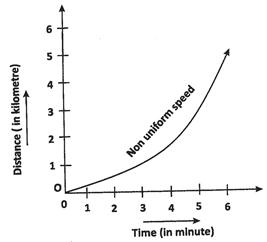 Statement 1: A car whose speed is constant is called in uniform speed.

Statement 2: A car whose speed is not constant is called in uniform speed.

(c) Both statements are false

(d) Both statements are true

A car whose speed is constant is called in uniform speed. Therefore, option (A) is correct and rest of the options is incorrect.

What type of speed does a curved on distance time graph line represent?

Therefore, option (B) is correct and rest of the options is incorrect.