Green plants are the only biotic component in our environment which produce food for other living organism (non green). Hence, they are called producers. Green plants absorb water and mineral from soil and carbon dioxide from atmosphere and make their food in the presence of sun light. The process in which plant make their own food is called photosynthesis and the mode of nutrition for obtaining the food is called autotrophic mode of nutrition. Plants make glucose and oxygen during the photosynthesis.

Some part of the photosynthesis product i.e. glucose is absorbed by the plant itself for their nutritional need and growth. Some part are stored in the fruits of the plant, which are consumed by the consumer. Consumer and plant breathe in oxygen.

Living organisms which feed directly or indirectly on the plants are called consumer. A deer feed on plant hence called primary consumer and a lion which feed on deer or deer like animal is called secondary consumer. Living organisms (non-green) which cannot make food for themselves depend on plants for their nutrition. This mode of nutrition in non-green living organism is called heterotrophic mode of nutrition. There are three types of consumers on the basis of their food habit.

Look at the following picture to understand the types of consumer on the basis of their food habits: 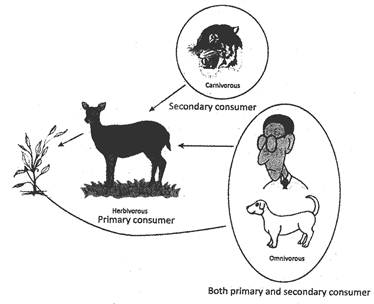 This balance in nature is called ecological balance.

Look at the following picture of ecosystem for aquatic animals: 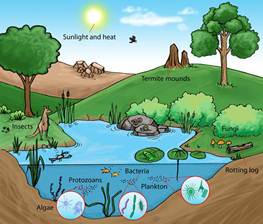 An eco-system consists of which one of the followings?

Which one of the following is the primary consumer?

Deer is the primary consumer as it eats plants only. Therefore, option (B) is correct and rest of the options is incorrect.

Living organism in our environment is called biotic component.

Non living things in our environment is called abiotic component.

Decomposers play an important role to clean our environment.

Producers in the ecosystem make their own food in the presence of sunlight.