While writing a program using a computer programming language, such as C, you need to follow the syntax of that language. A programming language also provide operators that enable you to perform various tasks, such as computing and manipulating values of variables, comparing values of different variables of same data types and testing multiple conditions. After developing algorithm, you need to develop flowchart.

How to Develop Flowchart

Flowchart is a technique that allows you to represent computer program graphically. Each step in the flowchart is represented by a different symbol and contains a short description of the step. Using flowchart, you can easily understand the logic of a program. A flowchart represents the logical and operational steps to be performed within the system for transforming the input process into output. Flowchart serves as a basis for discussion and communication between the system analysts and the programmers.

To create a flowchart, you need to use the following symbols:

Rules for Creating a Flow Chart

v  While creating a flow chart, only a single flow line comes out from a process symbol.

v  Flow direction of a process will always indicate either from left to right or from top to bottom, as shown in the following figure:

v  In decision box, only one flow line enters and multiple flow lines can come out, as shown in the following figure:

Look at the following flow chart to find the greatest of three numbers, X, Y and Z: 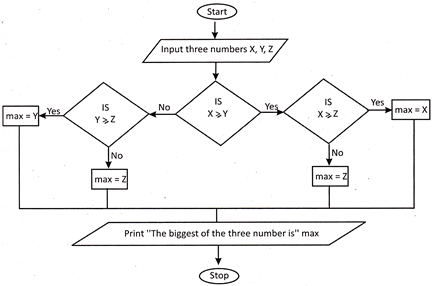 Basically, there are two types of programming language.

v  The translation of source code to machine code is not needed. Hence, it reduces the compilation and interpretation time.

v  Using a low level language, programmers can use processor and memory in better way.

v  It provides direct control of computer storage and registers.

1. First Generation (1GL): It is the machine language. This language is directly processed by microprocessor. There is no need of any translator. Instructions written in machine language are dependent on machine and changes from one computer to other.

2. Second Generation (2GL): It is also known as assembly language. It is also a low level language but is different from machine language. Instead of using binary sequence to represent a program, it uses mnemonic codes.

Mnemonic codes are short abbreviations that are used to provide instructions to a computer. To translate these mnemonic codes into machine codes, assembly language uses a special program called assembler.

High level programming language is closer to human languages. They do not directly interact with the hardware. Simple English statements are used to write program n high level language. These statements are needed to convert into machine language. For this, compilers/interpreters are used.

FORTRAN, C, COBOL (Common Business-Oriented Language), Prolog and PASCAL are some of the common examples of High Level Language. FORTRAN is mostly used for scientific calculations and COBOL is used for business purposes.

v  They are machine independent language.

v  They provide higher level of abstraction as compared to machine language.

v  The chance of error is very less and errors can be find and debug easily.

v  They are easy to learn.

2. Procedural Language: It provide a series of well-structured steps and procedures within its programming context to develop a program. FORTRAN, COBOL, PASCAL and ADA are the examples of procedural language.

3. Non-Procedural Language: It is a type of high level language in which we have to specify only 'what to do' and not 'how to do'. SQL (Structured Query Language) and RPG (Report Program Generator) are the examples of non- procedural language.